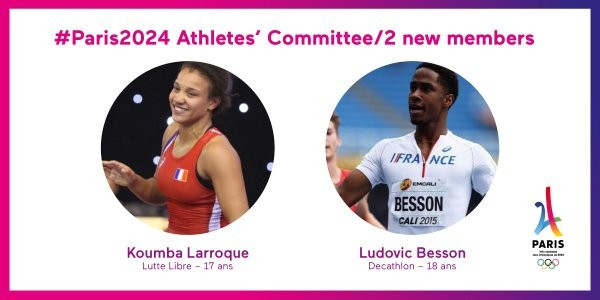 Two teenagers have been elected to join some of France's best known Olympic legends in the Paris 2024 Athletes' Committee, which was unveiled in full today.

The list of members was headed by two teenagers elected to the panel by fellow athletes in 17-year-old wrestler Koumba Larroque and 18-year-old decathlete Ludovic Besson.

Both competed at the Nanjing 2014 Youth Olympic Games and form part of "Generation 2024", a group of young French athletes who could compete at their home Games in eight years time.

They are joined by other major French sporting legends of the present and recent past including Florian Rousseau, winner of three track cycling golds across the Atlanta 1996 and Sydney 2000 Games, 1997 world 400m hurdles champion Stéphane Diagana and two-time Olympic fencing champion Laura Flessel, the French flagbearer at the London 2012 Opening Ceremony.

Aside from Le Fur, there is a heavy Paralympic presence on the Committee, with other members including Beijing 2008 wheelchair tennis champion Michael Jérémiasz and Alpine skiing superstar, Marie Bochet.

Bid officials are keen to highlight how each member is playing an active role within the bid rather than just an ambassadorial one.

"Since its inception, the Committee has played a key role in driving the bid forward and mobilising the sports community across Paris and France as part of the ambition to deliver an Olympic and Paralympic Games for the athletes, by the athletes," a statement today claimed.

"Athletes will continue to have an important role in the bid going forward, playing a vital part in the Paris 2024 Observer Programme at Rio 2016 where the bid will listen and learn from the Organising Committee in a live Games scenario," today's statement added.

"Paris 2024 is also in the process of developing a mobile application which will allow athletes to communicate with the bid, making it easier than ever for them to contribute their insights, ideas and suggestions as the project continues to evolve."

The announcement follows the unveiling of a 53-strong Athlete Advisory Board by Los Angeles last week, one of Paris' three rivals for the 2024 Games along with Budapest and Rome.

“We’re delighted to welcome Koumba Larroque and Ludovic Besson as the newest members of the Paris 2024 Athletes’ Committee," said Estanguet.

"It was crucial for us to bring together different generations of athletes to play a key role in the bid and we now have a diverse mix of great Olympians, current athletes and young champions who are driving the project forward.

“Athletes are the heart and soul of the Olympic and Paralympic Games and this is why we want them to be the architects of the Paris 2024 bid - they know what it takes to compete at the highest level on the greatest sporting stage.

"I’d like to say a huge thank you to the athletes that have played such a major part in the Paris bid from day one."

A final decision between the four bidders is set to be made at the 2017 IOC Session in Lima.