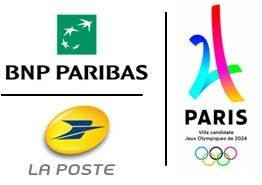 The addition of the two companies takes the total number of sponsors for the bid to seven, with La Française des Jeux, La Caisse des dépôts, Elior Group, JCDecaux and RATP having already been announced as supporters.

In line with the commitment from other sponsors, BNP Paribas and La Poste are understood to be paying €2 million (£1.6 million/$2.3 million) each to support the Paris 2024 Bid Committee.

The total cost of an Olympic bid has been estimated at upwards of €60 million (£47 million/$67 million).

Paris 2024 is aiming to cover at least half of that through private financing, and the city’s bid team expects to announce further partnerships in the coming weeks.

As part of its new Paris 2024 partnership BNP Paribas will focus on the theme of ‘"developing talent", activating their sponsorship to promote positive working cultures to their employees and clients, it is claimed.

BNP Paribas is already heavily involved in sports sponsorship, particularly tennis, which it has supported since 1973.

Among the tournaments it sponsors are the French Open, the Davis Cup and the Fed Cup.

La Poste, an official supporter of this year's UEFA European Championships, which are being staged in France, will create new programmes and engage their 260,000 employees across the country to communicate their key values of trust and respect and promote the Paris 2024 bid to the country, they have promised.

We fully value their support and it is wonderful that our campaign already has so many major organisations backing our project.

“This significant achievement is a clear sign that Paris and France’s corporate community is firmly behind this bid, that they have excellent confidence in our economic future and hosting capabilities and that they see the great value and benefits of a Games in Paris in 2024.”

Paris officially launched its Candidature File for its bid on Wednesday (February 17), promising to put "sport at the service of society".

Paris are one of four bidders for the 2024 Olympics and Paralympics, alongside Budapest, Los Angeles and Rome.

The International Olympic Committee is due to choose a host city at its Session in Lima in 2017.