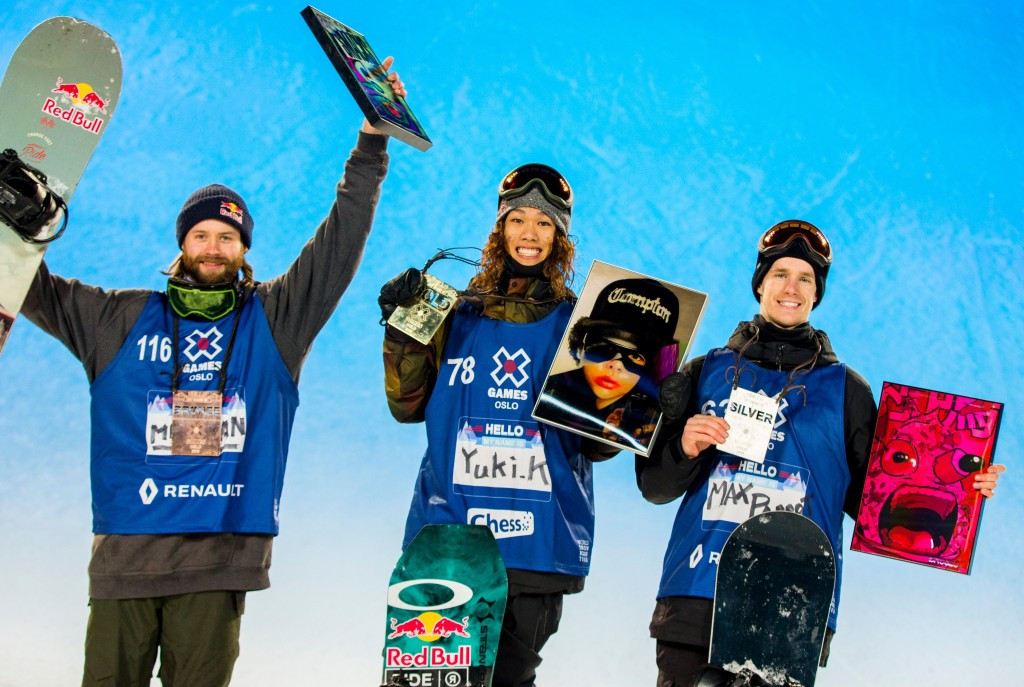 Kadono scored 90.66 points to finish ahead of Canada’s Max Parrot on 90.33 and Morgan, who posted 79.33 on one of the largest ski or snowboard jumps ever built.

Morgan, who finished 10th in slopestyle at the Sochi 2014 Winter Olympic Games, only returned to the snow in December after having knee surgery in April.

"I've always seen X Games as one of the biggest, raddest things out there," said the 26-year-old.

"So to be on the podium and compete with so many riders I look up to is amazing."

In the women’s snowboard big air event, The Netherlands' Cheryl Maas scored 91.33 to finish ahead of New Zealand’s Christy Prior on 84.00 and Norway’s Kjersti Oestgaard Buaas on 81.00.

The men’s and women’s skateboard street crowns went the way of the United States’ Nyjah Huston and Brazil’s Pamela Rosa with 93.00 and 80.33 respectively.

There was also success for Japan’s Ayumu Hirano in the men’s snowboard superpipe with 94.66 and the US’s Chloe Kim in the equivalent women's event with 98.00.

The build-up to the event was overshadowed by calls for Oslo to withdraw their financial backing to the Winter X Games due to the lack of World Anti-Doping Agency (WADA) compliant testing.

International Olympic Committee President Thomas Bach claimed earlier this month he was "concerned" about the issue and promised he would discuss the matter with WADA.

Bach also vowed to raise the issue with the Norwegian Government, as they have signed-up to the World Anti-Doping Code.

WADA had claimed that talks were ongoing with organisers on installing an anti-doping programme for the Games after its director general David Howman warned the lack a compliant testing system programme "sends the wrong message to athletes at a fragile time for clean sport worldwide".

Anti-Doping Norway chief executive Anders Solheim joined the criticism of the five-day event, which follows last month's Winter X Games in Aspen, and wants the city to pull their funding from the competition.