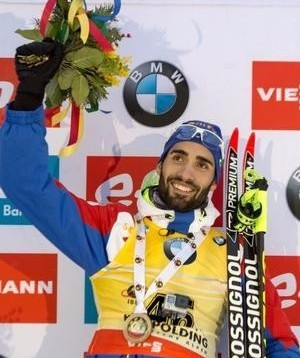 The double Sochi 2014 Olympic gold medallist pipped two of his fierce rivals to take victory as he finished ahead of Russia’s Anton Shipulin and Germany’s Simon Schempp by clocking a time of 23 min 51.5 sec.

Shipulin, part of the Russian team which claimed 4x7.5km relay gold at the Winter Olympics in 2014, finished 15.7 seconds adrift of Fourcade, while Schempp was three seconds back in third.

The trio always looked like earning a spot on the podium and it became purely a question of which colour medal they would take home as they dominated from the outset.

Each athlete shot clean but it was the Frenchman who pulled clear after the final standing stage to secure another triumph in his pursuit of a successful defence of his overall World Cup crown.

He currently tops the standings on 771 points ahead of Shipulin, who is second on 568.

"I was a bit nervous; I was not satisfied with my shooting this week during training and today, I had some problems zeroing," Fourcade said.

"But I was confident on my skis; I was clean and fast enough to win, so I am happy."

The pre-race build-up was dominated by news from the IBU that they had handed out a provisional suspension to an unnamed athlete for the “detection of a substance that is new on the WADA prohibited list 2016”.

The substance, defined under hormones and metabolic modulators, was found in a sample given by the athlete during an IBU World Cup event last month and the competitor now has the right to have his or her ‘B’ sample tested.

If the athlete opts to waive the ‘B’ sample testing or if it supports the results of the ‘A’ sample, the case will proceed straight to the IBU Anti-Doping Hearing Panel.

The unnamed athlete has been banned from participating in any IBU event until the issue is resolved.

“At the moment this is not considered a positive doping case,” a statement from the IBU read.

“Further relevant information will be released once the process reaches its conclusion.”