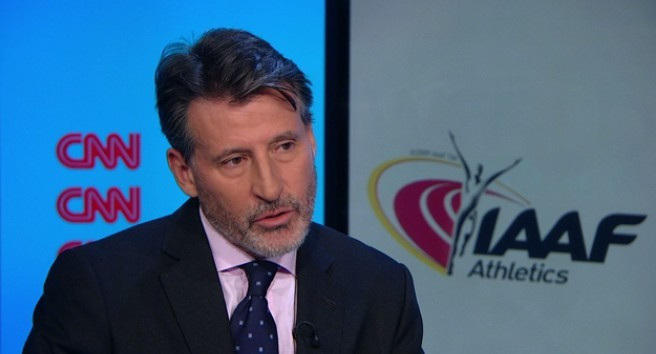 A whistleblower who first raised fears that Russian athletes were involved in a scheme to avoid being banned after testing positive for drugs has claimed Sebastian Coe should be given the opportunity to help solve the sport's problems.

Sean Wallace-Jones, senior manager of road running at the International Association of Athletics Federations (IAAF), who first raised the case of Russia's Liliya Shobukhova because of his fears she was being blackmailed, believes it is too early to judge Coe, who became President of the world governing body last August.

"Let's give the man the chance to carry out reform before condemning him," Wallace-Jones wrote on his Faceook page.

"There have been many mistakes but it is my conviction that Seb Coe will do everything possible to clean up the mess from the past and lay down the foundations for a stable and solid future for our sport.

"But we need to give him the chance to do that."

Wallace-Jones, who took his fears about Shobukhova being bribed by senior IAAF officials to the Ethics Commission chaired by British barrister Michael Beloff nearly two years ago, fears Coe could be hounded out of the position by a media seeking a scapegoat for the mess the sport finds itself in.

"Keep up the scrutiny, but stop attacking the guy before he has a chance to start enacting reforms," he wrote on Facebook.

"Rather to criticise incessantly those who are really trying to do something, chucking spanners into the works rather than being constructive.

"Let us see how this works out and let us look at things in a year's time and see what has been done, once there has been time to do it."

The support from Wallace-Jones came as Coe today promised he has not been involved in any doping cover-ups.

Fresh allegations about the IAAF's relationship with Russia could emerge here tomorrow when the second part of the report from the World Anti-Doping Agency (WADA) Independent Commission is published.

The first part, published last November, sent shockwaves around the world due to the allegations of systemic and state-supported doping in Russia, leading to the country's suspension and putting their participation at this year's Olympic Games in Rio de Janeiro in jeopardy.

Alleged involvement from IAAF officials, including the body’s former President Lamine Diack, in cover-up failures is expected to feature prominently in the second part.

Coe was the vice-president to Diack before replacing him, and the double Olympic 1500 metres gold medallist has been forced to repeatedly deny accusations he too was implicated.

“There is no cover up here,” Coe told CNN.

“The [IAAF] Ethics Board has already made its enquiries, the WADA report we will wait for tomorrow, the French police.

“I have been, as the President of the IAAF, in total cooperation with all these enquiries."

A French police investigation is currently ongoing against Lamine Diack concerning his involvement.

“One of the accusations is that I don’t sort of get the seriousness of this issue," Coe told CNN.

"I do, I’m dealing with it every day and I have been dealing with this since, effectively, the first day that I took over the role as President.

“Don’t run away with the idea that I don’t know that these are dark days - of course they’re dark days.

"The crisis, actually, was probably two or three years ago when what we’re now having to deal with was taking place.

"Our responsibility now is to make those changes and to take the sport into safe, safe territory.”

Chaired by International Olympic Committee member Richard Pound, tomorrow's WADA Independent Commission report is also expected to consider claims that as many as 12,000 suspicious blood tests taken from 5,000 competitors between 2001 and 2012 were not acted upon.

As well as his Commission colleagues Günter Younger and Richard McLaren, Pound is expected to be joined by French prosecutor Éliane Houlette, who will provide an update on the charges against Diack.

The report is due to be released in a press conference due to begin here at 3pm local time.