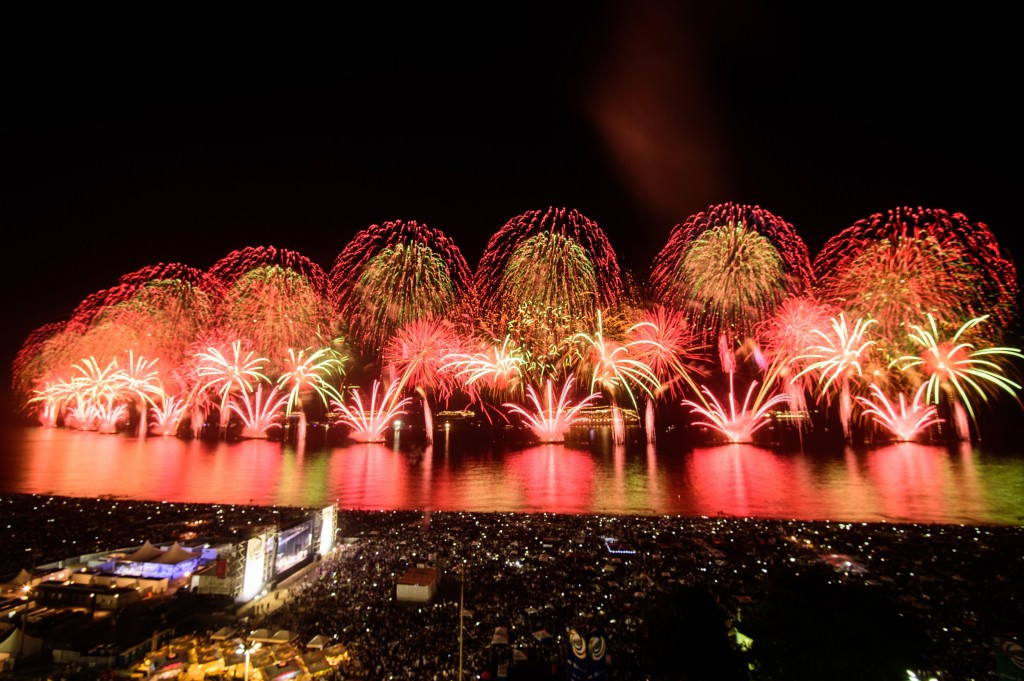 More than two million people packed onto Rio de Janeiro's famous Copacabana beach to ring in a New Year that will see the city host the 2016 Olympics and Paralympics with the world's most spectacular firework display.

Revellers dressed in white and wore different coloured underwear to express their hopes for the year ahead.

The city lit up the sky with more than 30,000 fireworks launched from 11 barges anchored off its iconic tropical coastline, welcoming the year that will bring South America its first Olympic Games.

The 16-minute show - set to the sounds of Brazilian samba, which celebrates its centenary in 2016 - consumed 24 tonnes of fireworks.

"We start the year of the Olympics," said

"Nothing better to start this year with this very special party, which is the Copacabana New Year's Eve."

Rio 2016 had planned to illuminate five enormous floating Olympic Rings at the climax of the show.

Brazilian organisers, however, decided to save the spectacle for a later date.

Since Rio de Janeiro was chosen to host the Games in October 2009 ahead of Chicago, Madrid and Tokyo, Brazil has gone from being an emerging market phenom to a deep recession, forcing officials to keep a tight lid on expenses.

The throngs of revelers from around Brazil and the world were determined not to let that get in the way of the party, however.

This year's celebrations are estimated to bring more than $680 million (£461 million/€626 million) to the local economy this year, the best for five years.

Alongside the party, swarms of worshippers waded into the ocean to leave offerings for Yemanja, goddess of the sea in the Afro-Brazilian Candomble faith.

Many cast hand-made boats into the Atlantic to carry their petitions for love, money and other desires to the goddess.

More than 2,000 police provided security on the beach.

When daybreak comes, some 1,300 rubbish collectors will arrive on the scene.

Last year revelers left behind more than 370 tonnes of rubbish.

Copacabana's celebrations were matched by a similar celebration in Barra de Tijuca, set to be the heart of the Rio 2016 Olympic and Paralympic Games.

Located in the west of the city, it is surrounded by lagoons and mountains, and boasts one of the best beaches in Rio.

The Barra zone will be home to Barra Olympic Park, the largest concentration of Games venues, plus the Riocentro exhibition centre that has four pavilions, the new Olympic Golf Course and the Pontal venue.

The zone will also be home to the Olympic and Paralympic Village, Athletes' Park and International Broadcasting Centre-Main Press Centre complex.

In addition to the people partying on the beaches, thousands more enjoyed the New Year's spectacle from the 10 cruise ships docked this week in Rio de Janeiro.