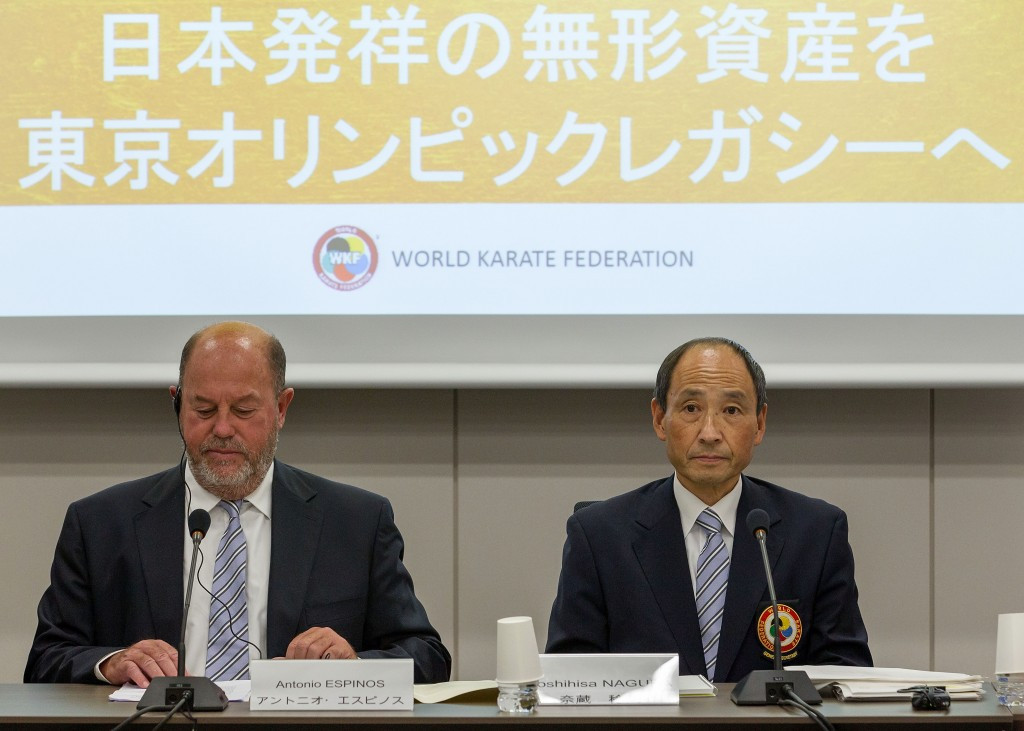 There is “no special reason” why karate shouldn’t be chosen for inclusion at Tokyo 2020, World Karate Federation (WKF) President Antonio Espinos claimed here today, though he remains wary of some of the challenges the sport faces in the lead up to next year’s decision at the International Olympic Committee (IOC) Session in Rio de Janeiro.

Karate was one of five sports, along with baseball softball, sport climbing, skateboarding and surfing, put forward to be a part of the Olympic Games in five years’ time by the Tokyo 2020 Additional Events Programme Panel in September.

Their recommendation needs to be passed by the IOC before sports are officially added to the programme and Espinos, who also heads the European Karate Federation, says it is about time karate was included at the Games following several failed attempts in previous years.

It was unable to gain a place at London 2012 or Rio 2016 and was initially turned down for Tokyo 2020, with wrestling the sport to be given the nod.

IOC President Thomas Bach then introduced the Agenda 2020 reforms, the strategic roadmap for the future of the Olympic Movement, which removed the limit of sports which could be on the programme, encouraging others to apply.

“We have been working towards the Olympics for many years - it has been a long time coming but we have never quite been able to reach our goal,” he told insidethegames here.

“We don’t see why karate shouldn’t be given the chance to be an Olympic sport and there is no special reason why we can’t be a part of the Games.

“The WKF have shown good parameters on social media and other things like that which the IOC gives value to and they are happy with the way we have been progressing the last few years.

“We are confident and I don’t think there will be a problem.”

Despite his confidence, the Spaniard admits there are hurdles they need to clear should karate be chosen, including which weight categories they would include after Tokyo 2020 proposed three men’s and three women’s kumite disciplines in addition to a kata competition for both genders, bringing the total number of potential Olympic gold medals available to eight.

WKF tournaments, including their flagship World Championships, feature five men’s and women’s categories, which raises a concern among the governing body as to how they go about installing an Olympic qualification process and how they select the athletes who will compete at the event itself.

The initial proposal was to have all 10 categories, which were included at the inaugural European Games in Baku in June, before it was whittled down to eight.

Eventually six was the amount put forward by Tokyo 2020.

Choosing the right categories is “the first problem”, the WKF President added, while revealing they had set up a Planning Commission in order to combat the issue.

The first meeting of the commission is due to be held in Paris in January.

“We are happy of course but we would have liked to have all five,” Espinos said.

“If we were given five we could have kept our main competitions as qualification events but now we have to see how we make the selection of the athletes.

“These will be a balance and combination between quality and universality.

“There are many ways to do it but we are reluctant to organise special qualification events as many of our Federations don’t have the resources to do this.

“We have many ideas and now we have the working team in place, I am sure they will come up with a solution.”