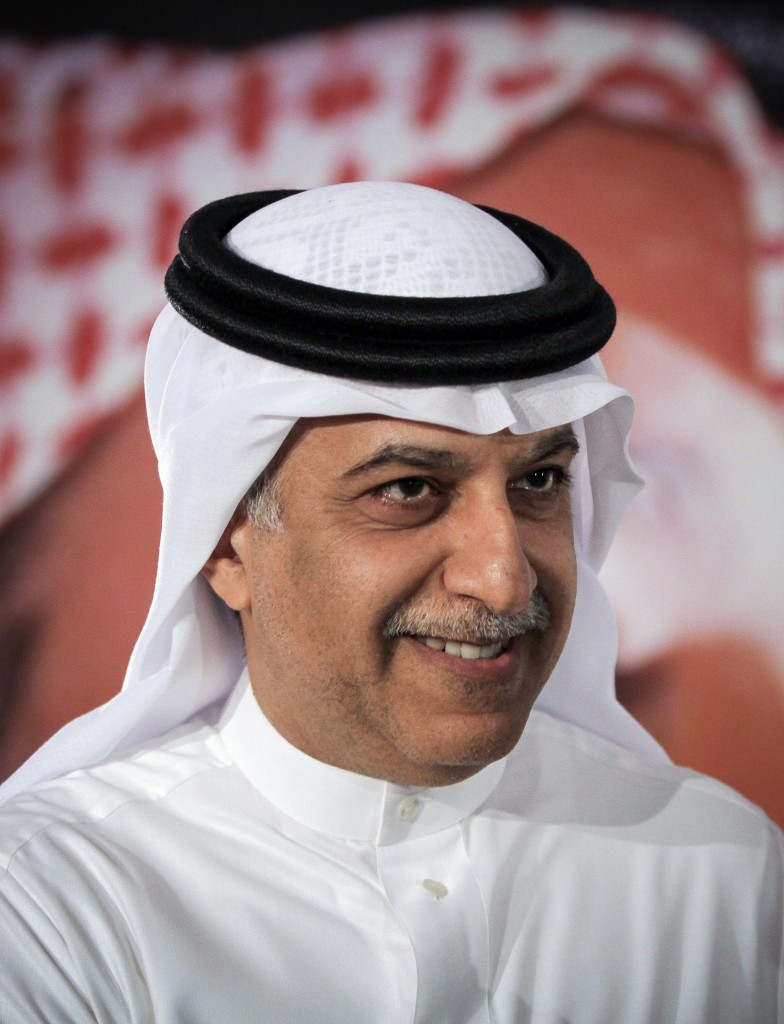 Bahrain's Asian Football Confederation (AFC) President had previously backed Platini for the top job at world football's governing body but threw his hat into the ring himself when the Frenchman was suspended by FIFA's Ethics Committee.

Sheikh Ahmad Al-Fahad Al-Sabah, a member of FIFA's ruling Executive Committee and also the President of the Association of National Olympic Committees and Olympic Council of Asia, told insidethegames last month that he expected Sheikh Salman to withdraw should Platini's bid be brought back to life.

The former France international and UEFA President is currently banned  after receivng  a supposed "disloyal" payment of CHF 2 million (£1.3 million/$2.1 million/€1.8 million) from outgoing FIFA President Sepp Blatter, who is also suspended, but his candidacy will be reassessed should his sanctions be lifted in time for the February 26 election in Zurich.

"We didn't expect that I would be here before the provisional ban on Michel and Sepp.

"We have to be ready for any scenario.

"If the provisional ban is lifted on Michel we have to sit together, myself and the stakeholders, and assess the situation and see what is the best way forward.

"Because you never know what is going to come up.

"Maybe after the ban is lifted Michel says after all this I am not interested in running.

"I said I am going because I have a good chance and the possibility of succeeding is a good one, otherwise I wouldn't put my name in the hat."

Sheikh Salman, who is funding his own campaign and won't take a salary if elected as President, said he would treat the organisation as a "corporate entity".

Whoever is elected will have a huge job on their hands as efforts to clean up FIFA's tarnished image in the wake of corruption allegations begins.

"Of course I think we need somebody there who people can trust, who can play very cleanly and openly," he said.

"I want to go in and show the rest of the world I can do the job in a proper way.

"In a way of openness, to show people that they are welcome to come in and check everything out."

The 50-year-old added that it would be up to the AFC to decide whether he could remain as President of the Confederation if successful in his FIFA bid, while he called for more women to be appointed to prominent roles.

He also believes that reforms at the organisation can come from "anywhere" and not just the recommendations of Domenico Scala, the chairman of the FIFA Audit and Compliance Committee, and François Carrard, the chair of the FIFA Reform Committee.

In addition, he again denied allegations of being complicit in the arrests and torturing of footballers and other athletes in Bahrain following a crackdown on pro-democracy protesters in 2011.

The allegations have rocked his campaign but he said he had no power to do what has been claimed as the Committee he was sitting on at the time couldn't take any actions which were unrelated to sport.

"When you read about yourself in the papers and people imagine you as this person, you feel gutted," he said.

"I don't know how to describe it but for people just repeating a lie again and again and they ask you to defend yourself it just makes no sense."

Sheikh Salman, who was in Zurich when seven FIFA officials were arrested at their hotel as part of an American investigation into corruption, also questioned the time and place of the raid.

"Things have happened in America and people should have been arrested in America," he said.

"Why in Zurich and just three days before the FIFA election?

"I don't see this matter has anything to do with FIFA, it is a confederation issue and remember that the confederations are not members of FIFA."