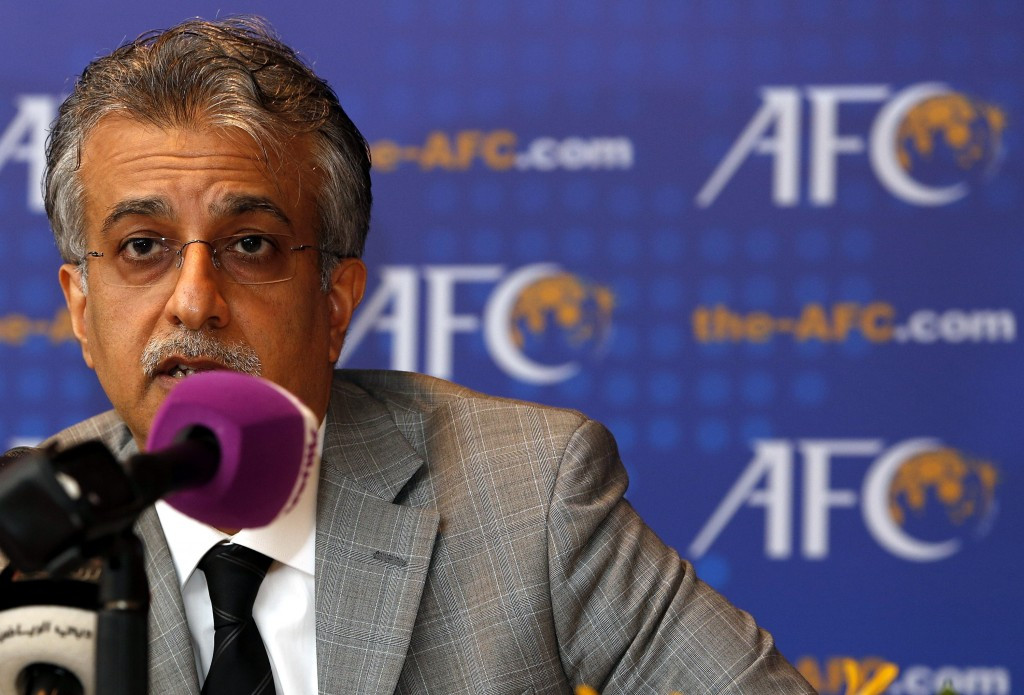 Despite not officially announcing he will enter the race to take over the top job within world football’s governing body, Sheikh Salman is considered the favourite to take over from the much-maligned Swiss but his campaign has hit an early stumbling block.

He has been accused of being complicit in the arrests and torturing of footballers and other athletes in Bahrain following a crackdown on pro-democracy protestors in 2011, by sitting on a committee which identified 150 sportspeople who had taken part in the demonstrations.

Though he denies the claims, the allegations cast a shadow over his mooted attempt to secure the FIFA Presidency and the ITUC have declared his candidacy as “not credible”.

Sheikh Salman is widely considered to be the front runner in the race following the seeming collapse of UEFA President Michel Platini’s candidature after the Frenchman was hit with a 90 day suspension over allegations about a payment of CHF 2 million (£1.3 million/$2.1 million/€1.8 million) made to him by Blatter, who has also been banned for the same period.

“It’s difficult to know how low FIFA politics can actually go,” ITUC general secretary Sharan Burrow, who has voiced concerns in the past over conditions for migrant workers on Qatar 2022 construction sites, said.

“Football's governing body refused to investigate the allegations against Sheikh Salman from 2011, and it is inconceivable that someone who is facing such grave allegations of human rights violations could step into the void at the top of FIFA resulting from Swiss and US corruption investigations.

“There are still trade unionists in prison in Bahrain, and freedom of association is still under attack.”

Burrow’s comments come after FIFPro, the international union for players across the world, outlined their criteria for the person who becomes the new FIFA President at next year’s Extraordinary Elective Congress in Zurich on February 26, saying they should adhere to “social wellbeing, fairness, democratic values and human rights".

“A clean break from the past is essential for FIFA to climb out of the toxic pit which continues to produce serious accusations of corrupt behaviour on almost a daily basis,” a FIFPro statement read.

“At the same time, there is no doubt the present mayhem has left FIFA morally bankrupt.

“FIFpro has previously stated its dissatisfaction as having no confidence in FIFA’s ability to reform from within.

“Individuals who have played a role in administering the game at the highest level are tarnished with the same brush, which is a sad reality for those who have displayed good intentions."

Sheikh Salman, President of the AFC since 2013, enjoys the support of Sheikh Ahmad Al-Fahad Al-Sabah, the Kuwati President of the Association of National Olympic Committees, who was elected to FIFA's ruling Executive Committee in April and is considered one of the main powerbrokers in the region.

He is also expected to have the backing of the European nations should he choose to stand due to the ongoing crisis surrounding current UEFA chief Platini.

Others to have declared their candidacy for FIFA President include Frenchman Jérôme Champagne, who attempted to enter this year’s race but failed to secure the required nominations and Jordanian FA President Prince Ali Bin Al Hussein, who lost to Blatter at the 2015 vote in May.