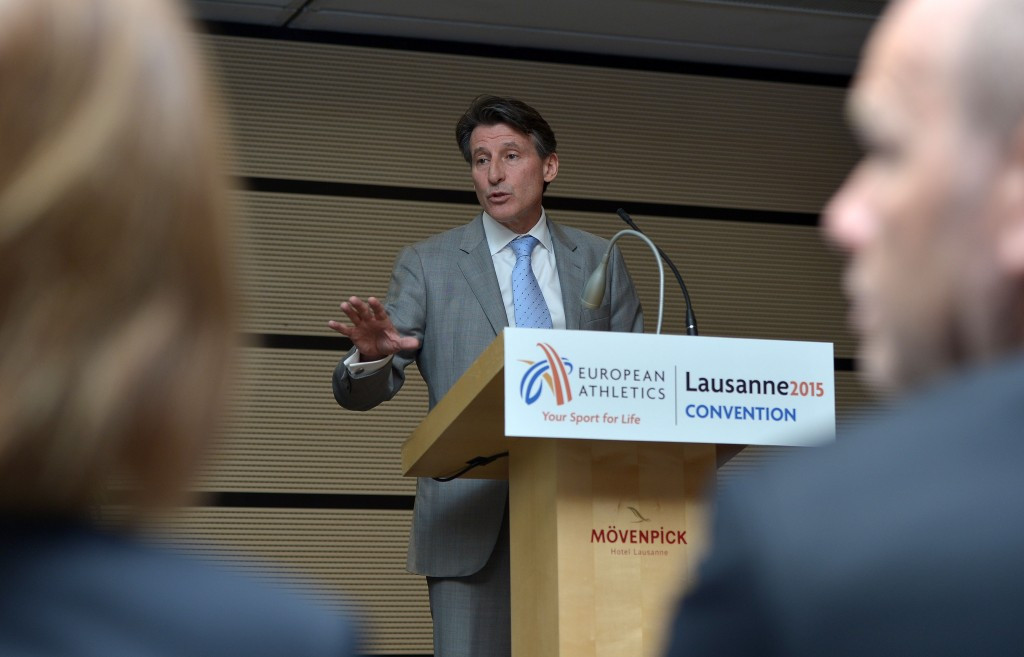 International Association of Athletics Federations (IAAF) President Sebastian Coe today revealed he is in the process of creating a new integrity unit, a key election manifesto promise, as he publicly unveiled an overhaul of the world governing body's advisory structures.

The double Olympic 1500 metres gold medallist had pledged to set-up a new body to deal with anti-doping following widespread allegations made by British newspaper The Sunday Times and German broadcaster ARD of drug-taking among some of athletics' best-known names.

"I do want a system that is more independent, that relieves the [IAAF] Members' Federations from some of the pressure, some of the resource implications, some of the challenges of a legalistic nature," Coe told an audience, including International Olympic Committee (IOC) President Thomas Bach, at the the European Athletics Convention in Lausanne today.

"That will actually mean broadening the testing pool internationally and reducing your international commitments, but allowing you to focus on what you do extremely well, which is national testing programmes and educational programmes.

"It will mean a swifter management around our results.

"It will mean a swifter – I hope – period between testing and sanctioning, and I hope it will release some of those precious resources, that I know you find challenging sometimes when you're dealing with those legal challenges,"

Key changes in the IAAF's Commission include the formation of a new Youth Engagement Commission, fundamental to Coe's pledge to attract more youngsters to the sport.

It is one of 10 Commissions and 10 Special Advisory Groups, each with 10 members, who, mostly via video and teleconferencing, will aim to convene 10 times each year to put advise and ideas to the IAAF's ruling Council.

“Central to the process of reviewing and building new structures, I am today announcing widespread changes to the composition and function of IAAF Commissions for the approval of IAAF Council in November” Coe, elected to replace Lamine Diack in August, said.

“These changes are designed to broaden the experience and ability available to our sport and make the IAAF’s advisory bodies more efficient, more focused and more representative.

"They will be smaller groups with increased representation of women, younger age groups, coaches and former athletes and experts from outside athletics.

“These advisory bodies will make better use of technology to increase the level of dialogue between these advisors and the IAAF beyond the regular face-to-face meetings.”

The number of IAAF Commission has been cut from 15 to 10.

“We are reviewing the IAAF Commissions to ensure that the IAAF Council gets the best possible advice and support moving forwards," said Coe.

"There will be 10 Commissions, each with a maximum of 10 members, except the Athletes'  Commission which, being partially elected, is a special case."

Besides the Athletes', the Commissions which will continue in their current format are Coaches, Competition, Development and Medical and Anti-Doping.

“In addition, there will be two other special Commissions: the existing Masters and Ethics Commissions, which are to be considered special cases as independent bodies.

"The Ethics Commission will be renamed the ‘IAAF Independent Ethics Board’ to ensure distinction between it and other IAAF Commissions.”

A number of IAAF Special Advisory Groups are also to be established.

“I am also announcing the creation of a number of IAAF Special Advisory Groups to help address specific areas of importance to the IAAF’s administration and development of the sport," said Coe.

"With these groups I’m looking for speed of decision, focusing on trends and innovation," said Coe.

"What I’m hoping for across the Special Advisory Groups are 10 sustainable achievements each year.

“The reorganisation of the Commissions and specialist areas covered by the Special Advisory Groups should leave no one in any doubt about my priorities as president.

“Only if we successfully engage in this reorganisation will we be able to offer the best possible advice to IAAF Council and thereby build a robust, innovative and transparent organisation which is fit to deliver with its member federations, a modern, athlete-focused sport that is attractive and exciting to a young audience."