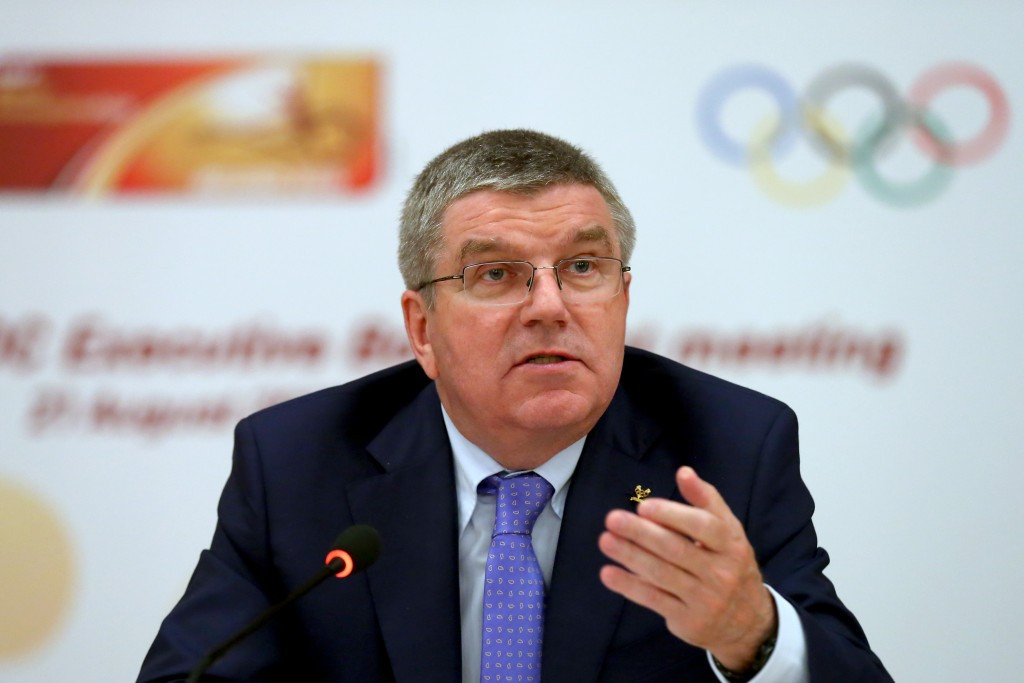 Thomas Bach, President of the International Olympic Committee (IOC), recalled his days as an Olympic athlete representative with Sebastian Coe here today as he said he was “absolutely sure” that, under the Briton's impending Presidency of the International Association of Athletics Federations (IAAF), the two organisations would work “very, very closely together” to eradicate doping.

Bach’s first question at the joint IAAF/IOC press conference related to the current problem athletics has with doping allegations and how significant it would be for Coe to be involved as President.

“You may know that Sebastian Coe and I have come a long way together and actually this was started with the fight against doping in 1981 when as athlete representatives in the Olympic Congress in Baden-Baden we were asking for a lifelong ban for any infringement on the anti-doping rules," he said.

“From this time on we have always been together in this fight and in this effort to protect the clean athletes.

“This is why I am not only confident, this is why I am absolutely sure that the IOC and IAAF, with President Seb Coe, will work very, very closely together in a zero tolerance policy against doping.”

Bach, winner of a fencing team gold medal in the foil for Germany at the 1976 Olympics in Montreal, added that both he and Coe had vainly sought lifetime bans for doping at that time.

“If you ask me about my emotions I would say really, yes, a lifetime ban I would still support,” he said.

“But I had to learn from different courts and lawyers, like Seb Coe and others asking for this, that this is legally just not possible.

“A lifelong ban does not stand any kind of challenge, so we have to accept this.

“It is a matter of human rights.”

Cricket may not be an Olympic sport - yet - but Bach played a straight bat to the question of how the IOC felt about the recent allegations that had been levelled at thenumber one Olympic sport.

“First of all it is too early here to speculate about results,” he said.

“We have been in contact with the IAAF from the very beginning of these allegations and have had the opportunity to discuss the subject on different levels.

“We have also learned about the statement from WADA (World Anti-Doping Agency) and the Independent Commission from WADA which I think is very clear.

“Until 2009, before the Athlete Biological Passport was introduced, none of the test results contained in this database could be used as proof for doping.

“They could only serve as an indication for target testing.

"And there the IAAF has explained to us in different ways that this is what they have done, following up with the target testing.

“Since WADA said at the same time that it would be libellous to make the allegations of doping at this point in time I will not make such allegation and such comments.

“We are waiting now together with the IAAF for the results of the enquiry of this Independent Commission.”

Bach added that Coe’s proposal of establishing an independent anti-doping authority within world athletics was “quite interesting”, adding that it would be discussed at tne Olympic Summit in Lausanne during October.

“Obviously the protection of clean athletes will be on the agenda and we will have the opportunity to discuss the proposal among others because we always give thought to ways of improving the fight against doping in sport.”

Asked if he felt action had to be taken to “restore the credibility” of athletics in the wake of recent doping allegations, outgoing IAAF President Lamine Diack responded: “I don’t think it has been lost.

"There are allegations, accusations, lots of upheaval in the press.

"But if all this leads people to believe our sport is lost, where are we going then?

“There are all these accusations that we have done nothing, which is wrong, I think this is just sensational journalism.

"They are just trying to take advantage of this. the credibility of our sport has not been impinged.

“So Seb Coe takes the relay baton. He goes on fighting with the same transparency and strength.

“If you write in a paper that the doping results have been hidden since 2001, this is ridiculous, it hardly deserves an answer.

“We are trying to solve this problem as well as we can. Do you think we are doing nothing?

“If you think that one positive result is more important than 1,000 negative results there is nothing much I can do for you.”