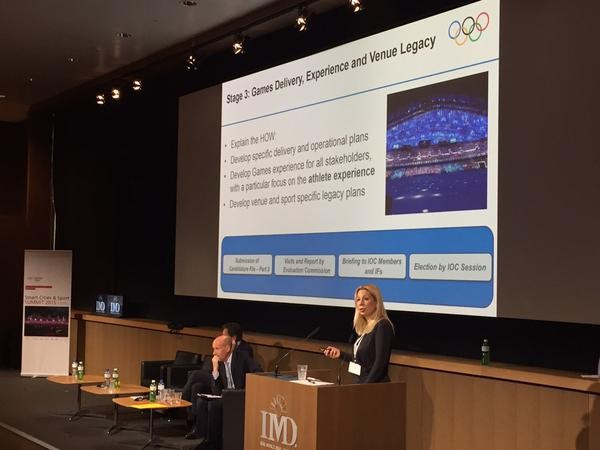 Companies which form part of The Olympic Partner (TOP) programme are set to advise cities bidding for the 2024 Olympics and Paralympics, it has been revealed here today.

The move, a consequence of the Agenda 2020 reform process, is designed to take advantage of the expertise and experience of the 12 TOP sponsors, and to reduce the need for bid cities to seek external advice.

It will not involve any financial or commercial relationship but will be on a purely advisory basis, where they will provide education, information and expertise for each of the five candidates on an equal basis.

This idea was approved in principle by the International Olympic Committee (IOC) Executive Board at their August meeting in Beijing, the IOC's associate director of its Olympic Games Department, Jacqueline Barrett, announced at today's Smart Cities & Sport Summit.

It remains a work in progress at this stage, however, with discussions currently ongoing as to the precise nature of their involvement.

"Up until now they have not been involved in the bidding process," she told insidethegames afterwards.

"But we feel it would be useful, if this can be done in a fair, equitable and IOC controlled manner, with no advantage to any one bidder."

Many of these companies have a longstanding relationship with the IOC, so have been involved with many Organising Committees and would thus have much to offer, it is claimed.

Utilising their skills would therefore be another way to cut costs and avoid cities having to seek expensive external help in some areas, it is hoped, a key strand of Agenda 2020.

After a six-month consultation process, a five-horse race for 2024 was officially launched last month pitting together Budapest, Hamburg, Los Angeles, Paris and Rome.

A series of “kick-off” meetings with the five Candidate Cities and their respective National Olympic Committees (NOCs) have already been held via video link.

Following a first official opportunity to meet with stakeholders, including IOC members, at the Association of National Olympic Committees General Assembly in Washington D.C. at the end of this month, the next major moment in the fledgling race will come in the week beginning November 16, when each city will meet with the IOC at its headquarters here.

A day will be devoted to each city in turn, with identical presentations and workshops to be given to each, Barrett said, quashing suggestions that this phase would take place via video-link as well.

In her presentation today, Barrett claimed the IOC hope all five will remain in the race until the decisive 2017 IOC Session in Lima, expected to be held sometime in September.

This follows the decision to scrap the applicant phase of the contest, after which the Executive Board previously whittled down the contenders to a smaller group of candidates.

The ruling Board do still reserve the right to exclude cities, but it appears this will only happen if there is a major problem, with deteriorating economic or political circumstances in the prospective host nation cited as one possible reason.

Barrett, who spoke following IOC director general Christophe De Kepper, emphasised here to representatives from 50 cities from around the world how they are working to address "misconceptions" that all Olympic bids must follow the same blueprint.

She also reiterated they are hoping to address problems within the bids during the process, meaning less changes should be necessary once the winning city is selected.