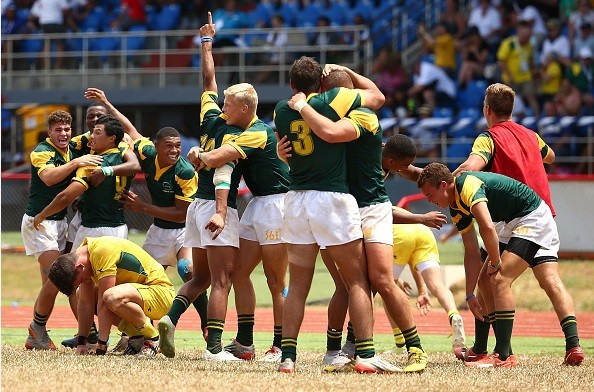 South Africa held off a late rally from Australia to seal boy’s rugby sevens gold with a 31-20 victory as sporting action at the 2015 Commonwealth Youth Games here came to a pulsating conclusion.

In what was an eagerly-anticipated clash between two global rugby heavyweights, the South Africans scored three tries in the first half to give themselves a comfortable 24-5 lead at the break.

But Australia fought their way back into the contest, cutting the deficit to four thanks to Joshua Coward, who exploited a gap in the defence before touching down in the corner.

South Africa were quick to respond, however, as a converted try in the late stages of a thrilling match moved them 11 points clear, and they were then able to see out victory, prompting rapturous celebrations at the final whistle.

Samoa gave the healthy crowd inside the venue, located in a picturesque setting, something to cheer as they beat England 12-10 in a closely-fought bronze medal match.

Australia took the women’s title as they hammered surprise package Canada 38-5 in a one-sided gold medal encounter, with Fiji clinching bronze by virtue of a 22-15 win over the Cook Islands.

The boy’s final got off to a frantic start with South Africa keen to stamp their authority on proceedings and they went ahead when Hejno Bezuidenhout skipped through tame Australian challengers before crossing the line under the posts.

They then doubled their lead shortly after as Embrose Papier got his name on the scoresheet, before great work from Mannie Libbok freed Francois Agenbag to edge the South Africans further ahead.

Tim Anstee pulled one back towards the end of the half which seemed to briefly breathe new life into the Australian challenge but Stedman Gans unleashed his lightning pace to reinstate South Africa’s three-try advantage just before the interval.

Australia returned for the second period with renwed vigour, however, as the Blitzbokke seemed to take their foot off the gas, allowing Robert Leota to move the Thunderbolts to within two.

Coward’s effort then set up an intriguing finale but all hopes of a remarkable turnaround were swiftly ended by Agenbag, whose converted try sealed gold for the South African team.

Elsewhere on the final day of competition at Samoa 2015, India’s Sasikumar Makund added another gold to his country's tally as he proved too strong for Scotland’s Ewen Lumsden in the boy’s singles final, dropping just three games on his way to a 6-1, 6-2 victory.

Matthew Story ensured Wales finished on a high as he rounded off the podium by taking bronze, beating Eleftherios Neos 6-3, 6-0 in similarly comfortable fashion.

Venugopal and Makund had already teamed up the previous day to top the podium in the mixed doubles competition.