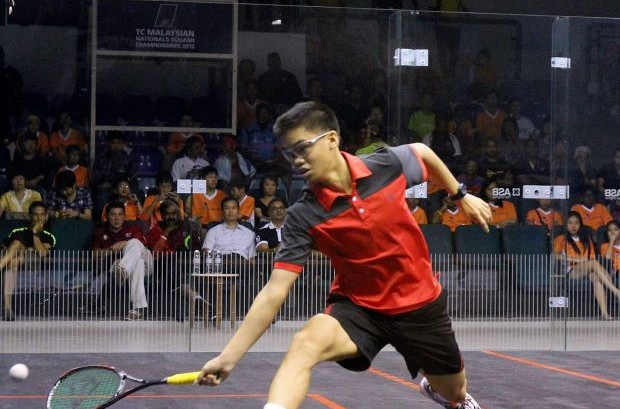 She dropped just eight points on her way to taking a 2-0 lead and, despite being pushed slightly further in the third, was able to emerge from the contest with an 11-3, 11-5, 12-10 success.

Sri Lanka’s Mihiliya Methsarani made light work of Pakistan’s Sadia Gul in the bronze medal match-up as she surged to a comfortable 11-8, 11-6, 11-9 triumph to secure the final spot on the podium.

The Malaysian, a three-times British Junior Open champion, dominated proceedings on his way to sealing an 11-8, 12-10, 11-5 victory to take home gold.

Testament to the nature of the medal matches in both the boy’s and girl’s competitions, Velavan Senthilkumar thrashed Israr Ahmad of Pakistan, who failed to win a single point on his way to an 11-0, 11-0, 11-0 mauling.

Elsewhere on a packed day of action at Samoa 2015, success continued for Malaysia as Nur Atikah Mahamad Sobri lifted a total of 160 kilograms to claim gold in the girl’s 58kg weightlifting category.

She hoisted an impressive 70kg above her head in the snatch discipline before she managed a clean and jerk of 90kg to top the podium ahead of Fijian Maria Mareta, while Australia’s Yasmin Carter was third.

Following on from the superb performance of compatriot Jamjang Deru in the boy’s 56kg event, India claimed another weightlifting gold thanks to Deepak Lather, who registered a combined total of 258kg to win the boy’s 62kg category.

In lawn bowls, Australia’s Jonathon David proved too strong for Seamus Curtain of New Zealand as he secured boy’s gold with a 21-14 win.

Northern Ireland added another bronze to their medal tally thanks to Stephen Kirkwood.