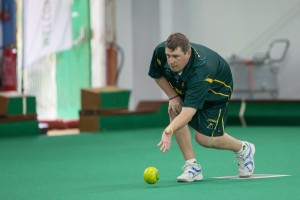 The result saw Brown retain the title he won at the 2005 World Games as the Australian pair kept up their 100 per cent record at the event to open up an unassailable lead.

Barry was also in good form in the singles competition, recording his third straight win by beating Scotland’s John Wardrope in two sets.

Mathieson and opponent Laurence Turner were then involved in a thrilling singles contest which saw the Englishman secure a narrow tie-break victory.

Both players came into the match with unbeaten records and it was the Scot who took the initiative, winning the opening set 12-6, before Turner hit back in emphatic fashion, levelling proceedings, taking the second 11-1.

It was Turner who secured the win by a slender margin to maintain his pursuit of an individual medal.

Elsewhere, hosts England booked their place in the semi-finals of the Under-19 Cerebral Palsy World Football Championships, being held alongside the CPISRA World Games, as they annihilated Japan 15-0.

The English side were able to assert their dominance despite a slow start and both Reiss Blackwell and Reece Macmillan bagged hat-tricks, while Dale Smith finished the game with five goals to his name.

In the other match to take place today, Scotland made light work of Australia as they won 8-0.

The Scots lead 3-0 at half-time and refused to take their foot off the gas in the second half, with long range strikes from Lewis McIntyre and Declan Docherty providing the pick of the goals.