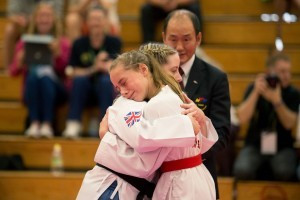 Pivaro scored 6.90 and 6.93 in the first and second rounds of the final respectively, giving her an average of 6.915 and bettering Carrington’s by 0.18.

Each competitor was marked out of six on accuracy and four on presentation by the panel of five judges with their average score used to determine the final medal placings.

Carrington could take some consolation in winning the women’s P33 class with a final score of 6.735.

On the men’s side, Britain’s Ben Savage won the P34 event with an average of 6.785 putting him ahead of fellow countryman Kent Smith on 6.315 and Australia’s Nicholas Riches on 5.75.

Smith did not have to settle for second best in the P33 event though as he and Riches replicated their respective scores to take gold and silver.

Adding to his two-medal haul, Riches also claimed the Spirit of the Games award, given to an athlete in each sport who embodies the spirit and the values of the World Games.

The award is sponsored by Nottingham Trent University.