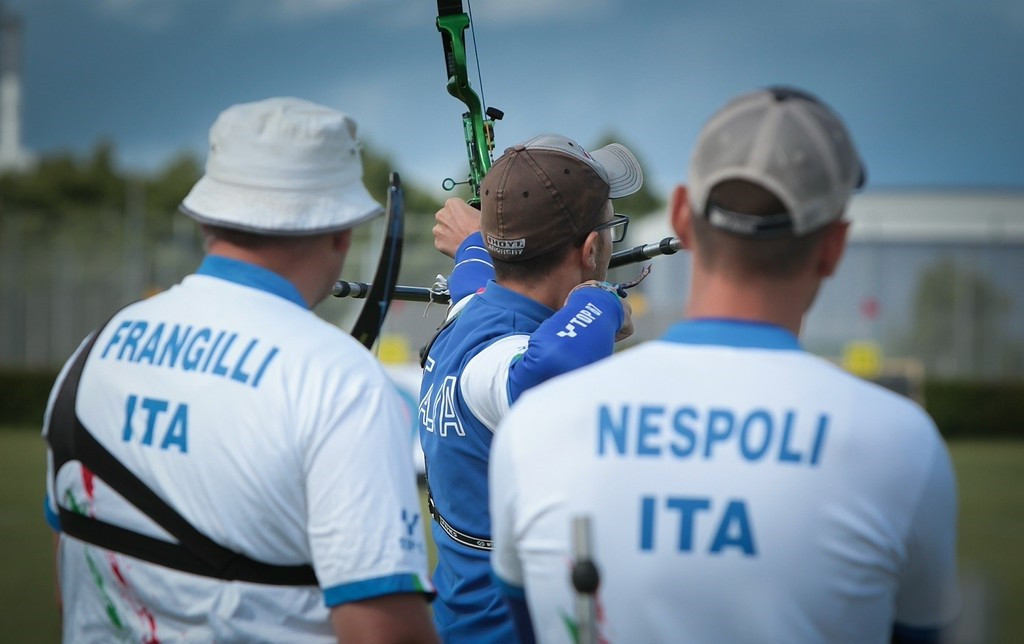 Defending Olympic champions Italy's men's team were forced to come from behind against India to seal an place in the quarter-final phase of the recurve competition at the World Archery Championships in Copenhagen, sealing an Rio 2016 Olympic quota place.

Having been one of only 16 teams to have made it through the qualification round yesterday, the Italian team of Michele Frangilli, Mauro Nespoli and David Pasqualucci knew that victory in their first knock-out match against India would seal their spot at Rio 2016 with eight quota places on offer.

A shock appeared to be on the cards, though, when India's trio of Rahul Banerjee, Mangal Singh Champia and Jayanta Talukdar took a 4-2 lead only for Italian team to turn the tide and forced a one arrow shoot-off.

It was at this point the experience of the London 2012 gold medal winners Frangilli and Nespoli paying dividends as they helped steady the nerves of 19-year-old Pasqualucci, scoring a 10 with his final arrow to help Italy win the shoot-off 29-26.

“I tried to calm down our young new member and he did very well to shoot a 10 with his last arrow.

“Our first goal was to win the quota, so now we can relax for the matches ahead."

Italy are now set to face China in the quarter-finals after they also drew 4-4 against their opponents Japan before coming through to win the shoot-off.

Spain and South Korea also required shoot-off victories over Germany and Poland respectively to seal both progression in the tournament and Olympic quota spots.

It proved to be a less fraught first knock-out match for The Netherlands as they sealed a straight sets 6-0 win over Austria, while the United States beat their North American rivals Canada 6-2.

Brazil, who, as hosts are already assured of a berth at Rio 2016, lost 5-3 to Australia and Chinese Taipei beat Ukraine 5-1 in their first round match.

There were also eight Olympic quota places on offer in the women's competition with Mexico earning the first berth after making light work of Spain, securing a straight sets 6-0 victory.

Mexico were joined by Japan and China after they clinched 5-1 wins over North Korea and the US in their respective matches.

Georgia and South Korea, meanwhile, claimed victories by the same scoreline over Italy and France.

There was a big shock, however, as the second ranked Chinese Taipei team were knocked out by Colombia, the 15th seeds secuing a 6-2 victory.

India were bidding to see off the challenge of Germany in their opening knock-out match and they had better fortune than their men's team as they were able to come from 3-1 down to claim a 5-3 victory, the same scoreline that saw Russian past Ukraine.