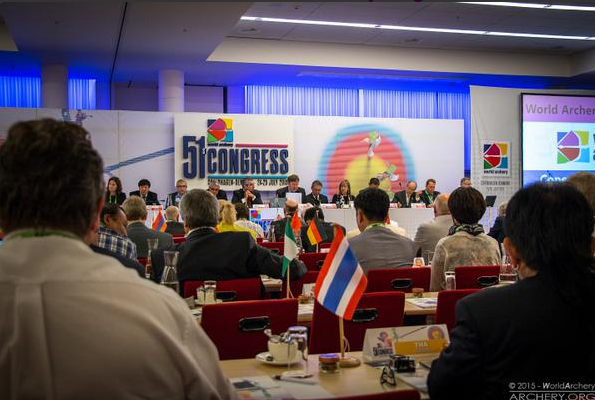 Zimbabwe were also re-affiliated, taking World Archery's total number of members to 153, demonstrating its commitment to developing the sport worldwide, it claimed.

More than 100 countries were in attendance at the Congress held on the eve of the World Championships, due to start at the Christiansborg Palace, the seat of the Danish Parliament, tomorrow.

A number of Olympians and World Champions were also elected onto the numerous World Archery Committees.

The World Championships, due to take place until August 3, offer 24 Olympic quota places per gender in the team event for Rio de Janeiro next year, while eight individual spots for men and eight for women are also at stake.

The Congress continued to demonstrate, what officials claimed is, World Archery’s commitment to Agenda 2020, the recent changes adopted by the International Olympic Committee (IOC), with the approval of amendments to its constitution and rulebook.

These strengthened World Archery's fight against doping, corruption and discrimination and promoted good governance, it is claimed.

IOC President Thomas Bach sent a recorded video message to the Congress in which he praised the sport for being “at the forefront of change throughout history” and highlighted the under-construction World Archery Excellence Centre in Laussanne as another example of this commitment to change and development.

“This has been a highly productive Congress," said Uğur Erdener, President of World Archery.

"As we have seen today we are committed to looking to the future as we continue to grow and develop.

"As President Bach kindly said, archery has always been at the forefront of change and with newly elected members of our Executive Board, a growing number of member associations, and amendments to our constitution and rulebook I am confident we will continue to evolve and find innovative ways to ensure archery remains attractive to our athletes and fans.

“Under the visionary leadership of President Bach and Olympic Agenda 2020 we have an excellent opportunity to really develop archery to realise its full global potential.

"We have a very exciting time ahead of us with the World Archery Championships beginning tomorrow and Rio 2016 just a year away.

"I have no doubt that our friends here in Copenhagen will deliver an outstanding event and we will be treated to some dramatic and world-class competition.”