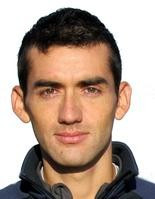 Marathon runner Christopher Guajardo, a Paralympic gold medallist at London 2012 as a guide for a visually impaired runner, has become the 14th athlete - and second Chilean - to test positive here during Toronto 2015 after reportedly failing for erythropoietin (EPO).

The Chilean Olympic Committee claim they currently seeking more detailed information on what exactly he failed for, reported elsewhere as EPO, Agliati added, with the athlete said to be "very concerned" by the news.

As an individual, Guajardo has competed in other major international events such as the 2013 Summer Universiade in Kazan and has a personal best of 2 hours 18min 44sec.

He is best known, though, for being the guide of visually impaired distance runner Cristian Valenzuela, with the duo having won a gold medal together in the T11 category over 5,000 metres at London 2012 in a time of 15min 26.26sec to secure the South American nation's first ever Paralympic title.

They had also won a gold and silver medal at the 2011 International Paralympic Committee Athletics World Championships in Christchurch.

Guajardo is the 14th case of these Games, and the second Chilean after cyclist Carlos Oyarzun, the Guadalajara 2011 bronze medalist who failed a pre-competition test for FG4592, a compound known informally as "oxygen in a pill".

Eight cases have been confirmed so far by the Pan American Sports Organization.

These have included Argentinean wrestler Luz Vazquez being stripped of her under 69 kilograms bronze medal and others involving fellow wrestlers Nicaraguan Elverine Jimenez and Paraguay's Stephanie Bragayrac.

Another case involves Peru's swimmer Mauricio Fiol, who admitted on Facebook to testing positive for the anabolic steroid stanozolol.

The results are expected this weekend.

Colombian cyclist Maria Luisa Calle, a 46-year-old veteran who controversially won a bronze medal in the Olympic points race at Athens 2004 only to be stripped of it before it was returned after the test was found to be faulty, also failed here after finishing fourth in the team pursuit.

This was reportedly for GHRP2, an enhancer that releases growth hormones.

Brazilian Olympic Committee officials have admitted weightlifter Patrick Mendes, fourth in the under 105kg event, and who has already served one ban in 2012 for doping, has also been notified of a failure.

Another weightlifter, Guatemala's Astrid Camposeco, also returned home having been notified on July 9 that a drugs test on May 23 was positive.