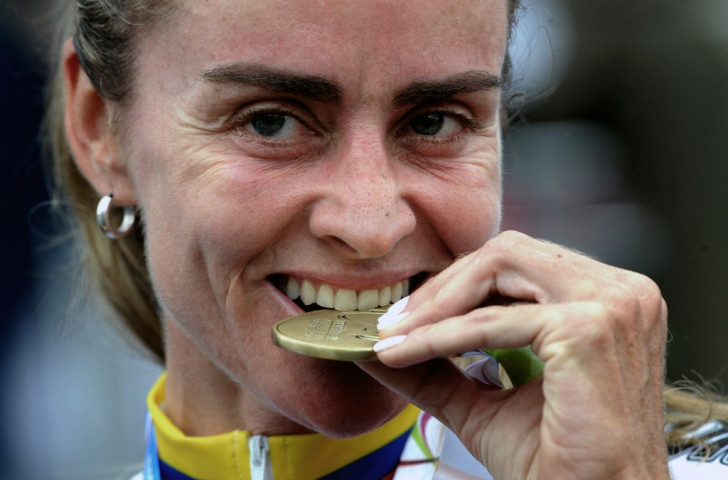 Maria Luisa Calle, a 46-year-old veteran who won an Olympic points race bronze at Athens 2004, has become the 13th athlete to be implicated in a doping scandal here at Toronto 2015, after the Colombian Olympic Committee (COC) confirmed she had failed a test today.

Calle has long been a figurehead for women's cycling in Colombia, having won six Pan American Games medals in addition to her Olympic success, including an individual pursuit gold at Rio 2007 followed by a time trial title aged 43 at Guadalajara 2011.

But she has also been a controversial figure, being stripped of her Athens 2004 medal after testing positive for banned stimulant heptaminol before it was returned after the test was found to be faulty following an appeal to the Court of Arbitration for Sport.

Calle had been due to defend her individual time trial title today but withdrew after being notified of her failure, which was registered in a post-competition test after she finished fourth in the team pursuit.

Following many rumours, the COC confirmed that she had failed in a short statement today.

No confirmation has been given as to what she failed for, although Colombian media are reporting that it was GHRP2, an enhancer that releases growth hormones, with formal confirmation from the Pan American Sports Organization (PASO) Medical Commission expected to follow soon.

Calle becomes the 13th case of the Games so far, with Colombia becoming the first country to register a second positive following the earlier one involving baseball player Javier Ortiz.

As well as Ortiz, seven others have been confirmed by PASO.

These included Argentinean wrestler Luz Vazquez being stripped of her under 69kg bronze and others involving fellow wrestlers Nicaraguan Elverine Jimenez and Paraguay's Stephanie Bragayrac.

The results are expected within 10 days.

Brazilian Olympic Committee officials have admitted weightlifter Patrick Mendes, fourth in the under 105kg event and who has already served one ban in 2012 for doping, has also been notified of a failure.

Another weightlifter, Guatemala's Astrid Camposeco, has also returned home having been notified on July 9 that a drugs test on May 23 was positive.