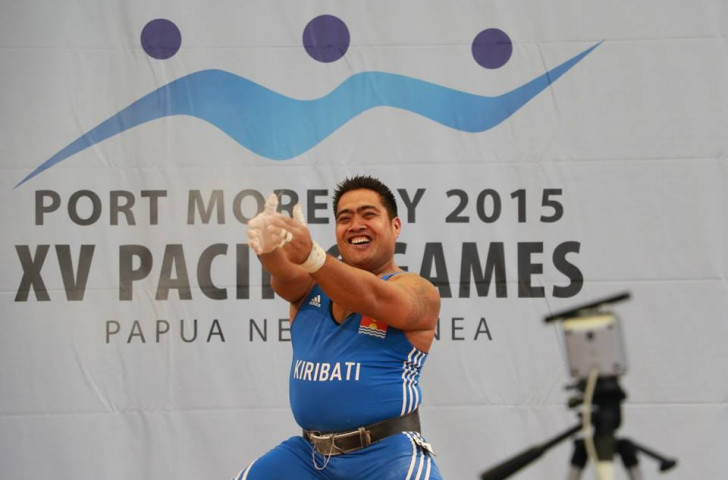 Commonwealth Games history-maker David Katoatau of Kiribati set aside his injury woes to seal a hat-trick of men’s 105 kilograms Pacific Games gold medals with a dominant display as the curtain came down on the weightlifting events at Port Moresby 2015 here today.

The 30-year-old, who became his nation’s first-ever Commonwealth Games medallist with gold in Glasgow last year, has been struggling with a shoulder problem recently but was still able to produce an excellent performance to sweep the three available titles.

The result also saw him claim the first golds for his country  at Port Moresby 2015.

Katoatau managed to secure the snatch crown with a lift of 141kg, leaving him level with Zac Grgurevic of Australia, but the Kiribati lifter was awarded victory by virtue of a lower body weight.

It was the clean and jerk competition where he truly came to the fore, lifting 200kg to give him the overall gold with a total of 341kg.

Following confirmation of his win, Katoatau exhibited his trademark dance as he left the stage which was met with rapturous applause and cheers from the crowd.

Rory Taylor of New Zealand secured his country’s first silver medals of the Pacific Games in the clean and jerk and overall, while Australian Grgurevic took home two bronzes and a silver.

Samoa continued their superb weightlifting form here as Ele Opeloge needed just two lifts to clinch all three gold medals available in the women’s over 75kg event, reigning supreme in the snatch and clean and jerk to seal the overall crown by a margin of 21kg.

Opeloge, fourth in the event at the Beijing 2008 Olympic Games and who won Commonwealth Games gold medals at Delhi 2010r, lifted 115kg in the snatch discipline with her first attempt, stepping up to the platform nonchalantly before executing the lift with ease.

She then waited for the rest of the field to post their three attempts before registering 131kg to round off a commanding performance with a total of 244kg.

Tracey Lambrechs finished with a hat-trick of silver medals to add to New Zealand’s medal tally.

It proved to be a day for the favourites as defending champion Itte Detenamo of Nauru, a Commonwealth silver medallist at Delhi 2010, claimed three golds in the men’s over 105kg division.

The 28-year-old was the favourite going into the event and he did not disappoint, holding off the challenge of Samoan youngster Lauititi Lui in both the snatch and clean and jerk disciplines to bag his country’s first titles at Port Moresby 2015.

He hoisted 167kg above his head to win snatch gold by 7kg, before his effort of 203kg was enough for both the clean and jerk and overall gold medals.

Lui finished as runner-up in all three categories, while Andrius Barakauskas of New Zealand earned bronze in the snatch and his team-mate, 18-year-old David Liti, rounded off the podium in the clean and jerk and overall events.