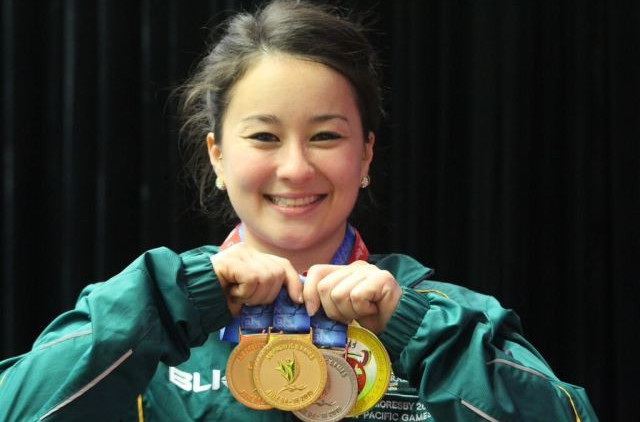 Yamasaki, a Commonwealth Games bronze medallist at Melbourne in 2006, delighted the vociferous Australian contingent inside the arena by topping the standings in the snatch event and finishing second place finish in the clean and jerk, good enough for the overall crown.

Commonwealth Games champion and home favourite Dika Toua failed to defend her women’s overall title as she registered three unsuccessful snatch attempts, much to the disappointment of the majority of the crowd.

Toua, who lit the cauldron at the Opening Ceremony last night, was considered the red-hot favourite to clinch her third straight overall Pacific Games title but she was unable to deliver in front of an expectant crowd.

The 31-year-old did however manage to finish the day on a high, lifting 110kg to clinch gold in the clean and jerk.

New Zealand’s Charlotte Moss also got her nation onto the medals table at the Pacific Games for the first time with a bronze medal in the overall category, despite failing to finish in the top-three finish in either the snatch or clean and jerk,

Both Australia and New Zealand are making their Pacific Games debut here and they will compete in three other sports, rugby sevens, sailing and taekwondo.

It still proved to be a successful day for the host nation as they secured six gold medals to top the medal tally after the opening session of weightlifting finals.

They got off to a wonderful start thanks to a superb performance from Toua’s sister Thelma Mea, who dominated the women’s 48kg category.

She lifted 70kg to win the snatch crown ahead of Mary Barter, the first Australian Pacific Games medallist in the 52-year history of the event, maintaining her momentum with a lift of 90kg in the clean and jerk.

Those two performances saw her comfortably take the overall honours on a total of 160kg, with Barter winning silver and Fiji's Seruwia Malani taking bronze.

Fiji's Manueli Tulo replicated the performance of Thelma Mea Toua, winning the snatch, clean and jerk and overall events in the men's 56kg as lifts of 107kg and 127kg gave him a total score of 234kg.

Elson Brechtefeld’s second place in the snatch helped him to overall silver, Nauru’s first medal at these Games, and the podium was rounded off by another Fijian, Poama Qaqa.

Following Yamasaki’s historic success, men’s 62kg event was the last medal event of the day and Morea Baru ensured the Papua New Guinea fans went home happy, clinching two of the three medals, including the overall crown with a total of 276kg.

The event also doubled up as the Oceania Weightlifting Championships, which meant each victor was awarded with a second medal, declaring them the Continental champion, as well as Pacific Games winner.