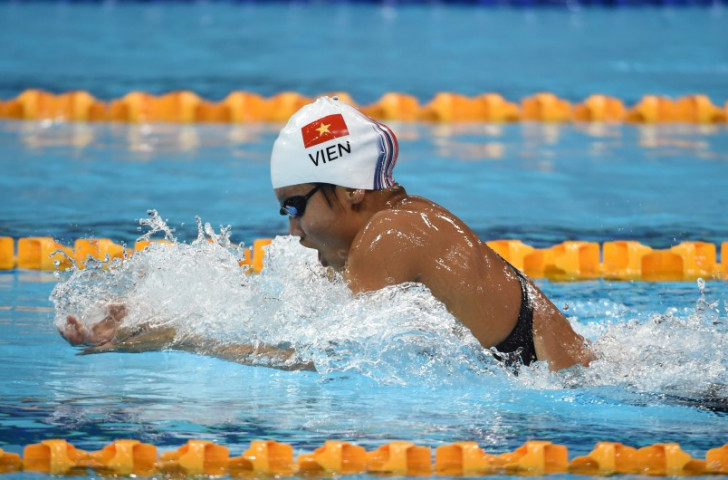 Vietnam’s Nguyen Thi Anh Vien produced an excellent performance on the opening day of competition at the Southeast Asian (SEA) Games as she claimed double gold in Singapore.

The Vietnamese star was in superb form as she raced to the women’s 800 metres freestyle crown in a Southeast Asian Games record of 8min 34.85sec, 18 seconds ahead of nearest challenger Himathongkom Ammiga of Thailand.

She then went on to repeat her record-breaking feat as she clinched gold in the 400m individual medley thanks to clocking 4:42.88, which proved too strong for another Thai swimmer in Pawapotako Phiangkhwan.

Hoang Quy Phouc sealed a treble for his nation as he won the men’s 200m freestyle event in an imposing time of 1:48.96, another Games record.

Home favourite Quah Zheng Wen was second before he then went on to set a Games record of his own by winning the 100m backstroke in 54.51 to secure his nation’s first swimming gold of the event.

Wen came into the Games targeting an incredible haul of 12 titles and the 18-year-old ensured he made a winning start to his attempt.

Singapore sealed their second swimming crown as their women’s 4x100m freestyle relay team pipped Thailand in a time of 3:46.60.

Elsewhere on a packed opening day of action, Claire Adorna of the Philippines reigned supreme in the women’s triathlon, clocking a time of 2 hours 13min 08sec , while compatriot Kim Mangrobang took silver.

Adorna opted not to undergo surgery in order to not miss out on participating at the 28th Southeast Asian Games and her decision proved to be vindicated as she claimed her country’s first gold medal of the event so far.

Despite disappointments in the pool, there was success for Thailand as the team of Sommit Anusorn, Phaophat Piyaphan, Waenphrom Nathaworn, and Borriboonwasin Kasemsit defended their Men’s K4 1000m canoeing title by posting a time of 3:04.781sec.

“We have a good team - not just athletes, but also management who are guided by our President’s vision,” team manager Dinyo Tolieng said.

“We prepared the athletes from a young age and their time has improved over the years.”

The multi-sport event in Singapore continues tomorrow and is due to finish on June 16.