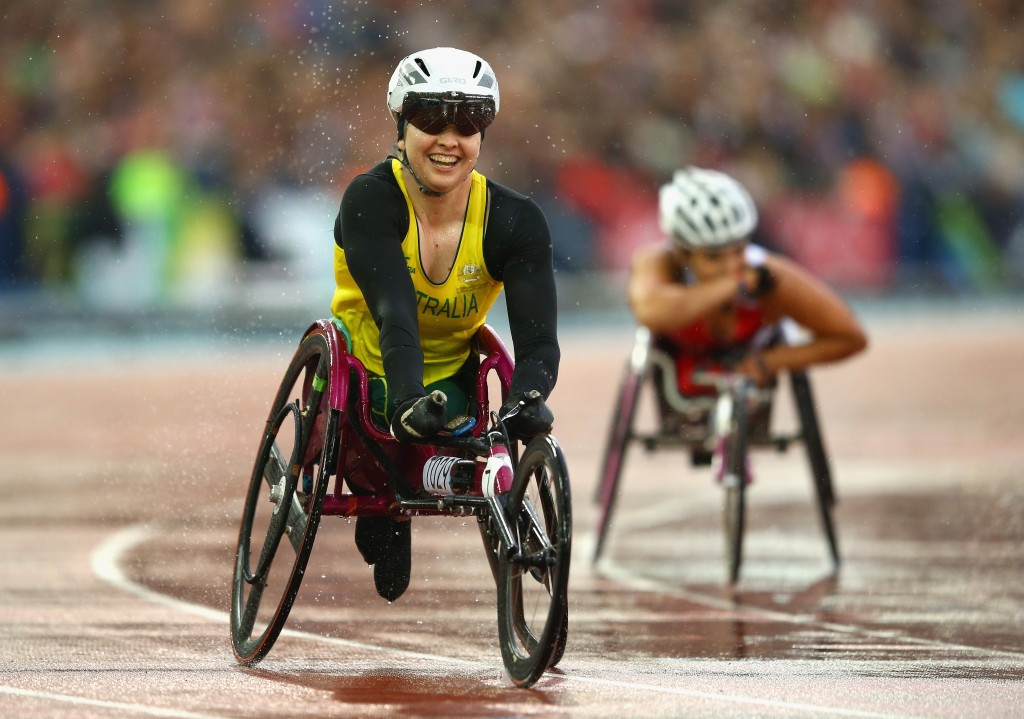 The 32-year-old, who won silver in the event at London 2012, clocked a time of 54.73 seconds to finish 1.72 seconds ahead of the United States’ Chelsea McClammer and a further 0.86 seconds clear of compatriot Madison de Rozario.

It bettered the record mark, set at Beijing 2008 by gold medal winner Jessica Galli of the US, by 0.15 seconds.

“I was hoping to do well in the series of racing we’ve got coming up but I didn’t expect that at all - I was more bothered about dealing with the wind,” said Ballard.

“It was a very strong wind so it was really helpful down the back straight and down the home straight I just pushed as hard as I could.

“The 400m is my favourite race, a lot of people hate the event but it is something I have learnt to love.

“It has given me great confidence for the next few races.”

On a day packed full of 400m races, the US’s Tatyana McFadden produced the fastest time of the year, 53.25 seconds, to win the women’s T54 ahead of Japan’s Tsuchida Wakako and The Netherlands’ Margriet van den Broek, who finished second and third respectively.

The women’s T20 was dominated by Hungary as Csontoas Piroska beat team mate Erika Keresztesi by 0.05 seconds with a time of 1:02.16.

Meanwhile in the men’s T54 class, Swiss world champion Marcel Hug crossed the line in 48.24 seconds to edge out The Netherlands’ Kenny van Weeghel on home soil after France’s Julien Casoli had posted the fastest time of the day and fourth fastest of the year, 47.76 seconds, racing from lane one in the penultimate heat.

The fastest men’s T52 time of the year, 57.72 seconds, was set by the US’s Raymond Martin, winner of five world titles at the 2013 IPC Athletics World Championships, as he finished comfortably in front of Austria’s Thomas Geierspichler and Thailand’s Kurattanasiri Pichaya.

European champion Toni Piispanen of Finland clocked a time of 1:22.56 to win the men’s T51 race with Belgium’s Peter Genyn in second and bronze going to South Africa’s Nicolas Pieter Du Preez, who closed the day by winning the men’s 10,000m T51 event in 39:32.21.

But there was disappointment for Piispanen’s fellow countryman Henry Manni, who could only manage second place behind Tunisia’s world and Paralympic champion Walid Ktila in the men’s T34 class, despite setting a European record time of 52.60 seconds.

Canadian world champion Brent Lakatos claimed the men’s T53 title in 49.15 seconds, finishing ahead of the US’s Josh George and Thailand’s Paeyo Pongsakorn, while Kuwait’s Ahmad Almutairi easily won the men’s T33 class with a time of 58.13 seconds, just shy of his own world record.