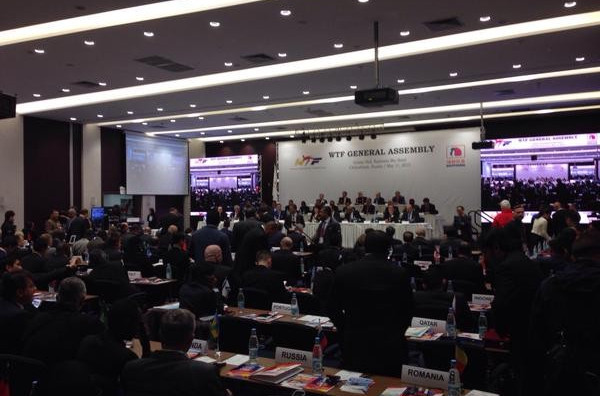 Taekwondo and wrestling have become the latest sports to suspend their membership from SportAccord, while taekwondo has also withdrawn from the World Combat Games.

It means seven International Federations (IF) have now made such a move, with the two today following the trend set by athletics, shooting, archery, canoeing and boxing.

Taekwondo's decision was a unanimous one by the ruling council following consultation with the members, World Taekwondo Federation (WTF) Chungwon Choue explained, with the decision to take effect immediately.

“Taekwondo is more than a sport; it is a philosophy," he added.

"It is a philosophy based on self-discipline, integrity and respect and at the WTF we believe we have an obligation to stay true to these values.

"It is with regret that taekwondo will not participate in the World Combat Games.

"However, we will continue to promote taekwondo and the Olympic values around the world and develop our sport for our athletes and our millions of fans worldwide.”

In a statement this evening following a Board meeting, United Wrestling Federation (UWW) President Nenad Lalovic did not specifically state the sport had withdrawn from the World Combat Games, but said they would not participate in any SportAccord event until relations have improved.

"Our decision, which is based on our full commitment to the Olympic Movement and its leadership, implies that for the time being, United World Wrestling shall refrain to participate in the activities and games organised by SportAccord, until the relations with ASOIF (Association of Summer Olympic International Federations) has improved to the latter’s satisfaction," said the Serb.

This marks another double-blow for SportAccord President Marius Vizer following his strong criticism of the International Olympic Committee (IOC) and its President Thomas Bach at last month's SportAccord Convention in Sochi.

Withdrawal from the World Combat Games, the SportAccord-organised event first held in Beijing in 2010, is a further setback, with the WTF and UWW having followed the trail set by the International Boxing Association last week.

Taekwondo had been a member of SportAccord since 1975 and had, along with wrestling featured at both the 2010 and 2012 Combat Games.

Along with boxing, the duo were among six Olympic sports due to feature at the 2017 Games in Lima, with question marks now hanging over whether two others - fencing and weightlifting - will remain on the programme.

The other, judo, is expected to remain as Vizer is also head of the International Judo Federation (IJF), with the IJF the only summer IF not to sign a letter supporting the decision of ASOIF to "disassociate" its relations with SportAccord last month.

insidethegames has contacted SportAccord for a reaction to the WTF decision, but is yet to receive a response.

The WTF also reiterated its strong commitment to the IOC during today's Assembly, taking place on the eve of the World Championships set to begin here tomorrow.

Although not here in person, Bach delivered a video speech at the beginning of proceedings, with this followed by a lengthy address by IOC sports director Kit McConnell.

He praised the sport for its innovations and hailed its current "position of strength" although he did warn for them to continue with their effort to consolidate the growth of the sport throughout the world, thus ensuring an even spread of medals throughout different regions.

Elsewhere during the Assembly, a progress report was given by representatives from Rio 2016, while amendments were made to several WTF Statutes and Competition Rules.

Formal approval was also given to the WTF Council's decision in January to recognise the Kosovo Taekwondo Federation as a full WTF-member following the Balkan Republic's approval as a member of the IOC during December's Session in Monte Carlo.

Athletes from Kosovo are expected to compete under their own flag here at this week's World Championships.