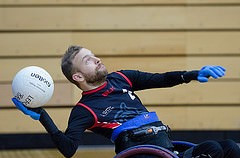 Storm took the title by virtue of a narrow 45-43 success over the Kent Crusaders in what was a gripping finale, while West Coast Crash were third.

Canterbury were the victors in the Shield competition as they beat the Crushers 40-25, with Gloucester taking third by with a commanding 33-9 win against the Hammerheads.

“The fact that we had 16 teams playing in our National Championships this year is testament to the success of the London 2012 legacy and the continuing investment by the Lottery and Sport England,” Great Britain Wheelchair Rugby chief executive David Pond said.

“This was the first event of our new partnership with BT, and we are all very excited about working with them, over the next three years, to provide more opportunities for more people to experience the sport.”

As well as the two competitions, around 200 spectators got the chance to try out the sport of wheelchair rugby, which is nicknamed “murderball” and was one of the most popular sports at London 2012.

Community partners Harlequins were also on hand to lead skills sessions as they attempted to draw more people into the sport.

“As a long-term supporter of disability sport and one of the driving forces behind the Paralympic Movement in the UK, we’re excited about our new partnership with GB Wheelchair Rugby,” BT head of brand partnerships Suzy Christopher added.

“As a long-term supporter of disability sport and one of the driving forces behind the Paralympic Movement in the UK, we’re excited about our new partnership with GB Wheelchair Rugby,” BT head of brand partnerships Suzy Christopher added.

“The BT Wheelchair Rugby National Championships was the first big domestic event being staged as part of this partnership, and it was fantastic to see the UK’s best wheelchair rugby players in action.

“Disability sport doesn’t just inspire us all to be the best we can be, it’s also about world class athletes and competition at the highest level.”

The first-ever event was attended by a few thousand spectators and marks the start of a three-year partnership between GBWR and BT, who have been heavily involved in disability sport in recent years.

It came ahead of the eagerly-anticipated BT World Wheelchair Rugby Challenge, due to run alongside the Rugby World Cup from October 12 to 16 and which will also be staged at the Copper Box.