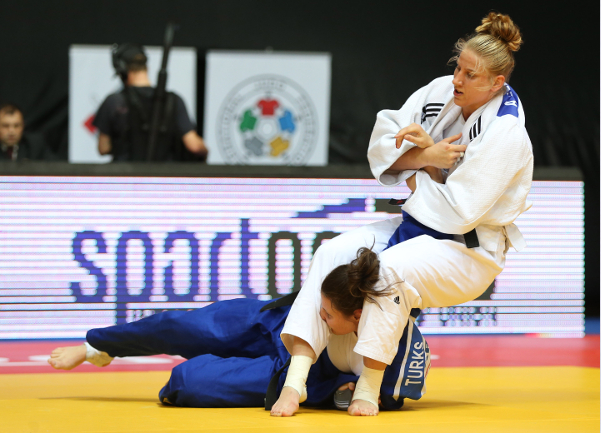 Anamari Velensek underlined her billing as top seed in the women’s 78 kilogram competition at the International Judo Federation (IJF) Grand Prix in Zagreb as the Slovenian stormed to gold.

Velensek required a golden score victory over Poland’s Daria Pogorzelec in the semi-final, but the final proved to be more straightforward as she doubled her country’s gold medal tally in the Croatian city, overcoming Ukraine’s Victoriia Turks with ease.

Pogorzelec bounced back from her narrow semi-final defeat to earn one of the two bronze medals in the division, with the second claimed by Abigel Joo of Hungary.

There was a surprise result in the over 78kg event as world number 40 Belkis Zehra Kaya of Turkey stormed through the rounds, including a victory over compatriot Gulsah Kocaturk in the semi-finals, on her way to gold.

Kaya had won all of her contests via an ippon in the lead-up to the final and continued that run with a harai-makikomi in the final against The Netherlands' Tessie Savelkouls.

Savelkouls’ silver saw her upgraded from the 2014 Zagreb Grand Prix where she earned bronze, with the bronze medals won on this occasion by German duo Franziska Konitz and Jasmin Kuelbs, after they saw off competition from Lithuania’s Santa Pakenyte and Kocaturk in their respective contests.

Krisztian Toth, who turned 21 on Friday (May 1) had further reason to celebrate after triumphing in the men’s under 90kg division after defeating Aaron Hilderbrand in the final, scoring early in the contest with a waza-ari, before keeping his German opponent at arm’s reach to take gold.

The Netherlands' Guillaume Elmont and Sweden’s Joakim Dvarby were the recipients of bronze medals after enjoying successful tournaments.

The men’s over 100kg division saw Iakiv Khammo of Ukraine secure his maiden Grand Prix gold medal by defeating Romania’s Vladut Simionsecu, as the 20-year-old underlined his potential with a mature display.

Roy Meyer of The Netherlands and Slovenia’s Matjaz Ceraj claimed the two bronze medals on offer in the men’s heavyweight event.