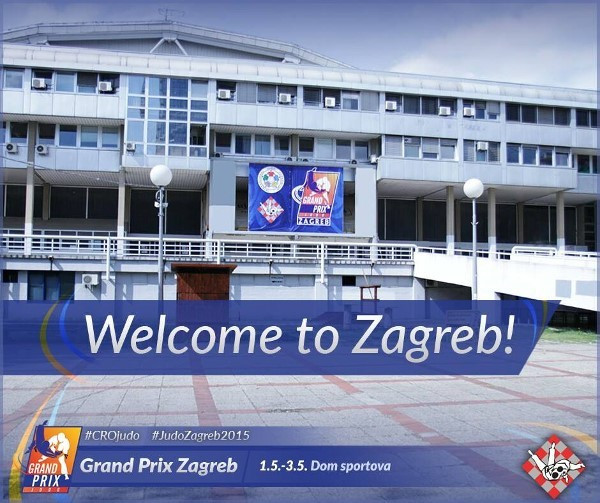 A record-breaking 439 judoka from 55 nations will compete in the Zagreb Grand Prix over the coming three days at the Dom Sportova Arena.

The Croatian capital is set to host the fourth Grand Prix of the year, following visits to Dusseldorf, Tbilisi and Samsun, with the entry level exceeding the country’s two previous events in Rijeka two years ago, and Zagreb last year.

The official draw was held today opposite the Grand Prix venue at the Panorama Hotel, where the Croatian team was unveiled in full judogi.

The host nation have entered 19 judoka with a mix of youth and experience, including 2014 Youth Olympic champion Brigita Matic.

“Winning the Youth Olympics in Nanjing was a beautiful experience for me and a big honour to fight there for the Croatian national team,” said Matic.

“It gives me motivation to keep training more and more and to qualify for the Olympic Games and represent my country on that stage.”

Matic’s older sister Barbara, a 20-year-old European bronze medallist, has been cruelly ruled out of her home event due to an injury sustained at the Tbilisi Grand Prix where she finished in fifth-place.

Sanda Corak, Croatian Judo Federation President, said: “It has been a long-term goal of the Federation to make judo the most popular sport in our country.

“We are very happy with the entry and have worked hard especially in these last few days to make sure all the preparations are made.

“This year we are pleased to introduce a special judo park where there will be activities for children and families all weekend.

“This year we have changed the venue to offer the best arena possible for the athletes and the event.”

The first day of action tomorrow features two male weight categories - under 60 kilogram and under 66kg - and three female weight classes - under 48kg, under 52kg and under 57kg.

Taciana Lima-Balde, who recently won her third consecutive African Championships gold medal to close in on becoming Guinea-Bissau’s first Olympic judoka at Rio 2016, is the top seed in the women’s under 48kg and will be confident of at least matching her bronze medal in Zagreb last year.

In the women’s under 52kg, world silver medallist Andreea Chitu of Romania will be the fighter to beat, while the United States’ Marti Malloy, an Olympic bronze medallist, will fancy her chances in the women’s under 57kg after securing victory at the Pan American Championships last week.

“We have seen an increase in the number of fighters, nations and the layout of the venue this year which is all very encouraging,” added Vladimir Barta, International Judo Federation (IJF) head sports director.

“On behalf of the IJF President Mr Marius Vizer, I would like to thank the Croatian Judo Federation and President Ms Sanda Corak for all of their work in hosting this event.”