There are three types of TEQ table: TEQ ONE, TEQ SMART and TEQ LITE. All of them are made to meet the International Teqball Federation's standards of quality and durability. 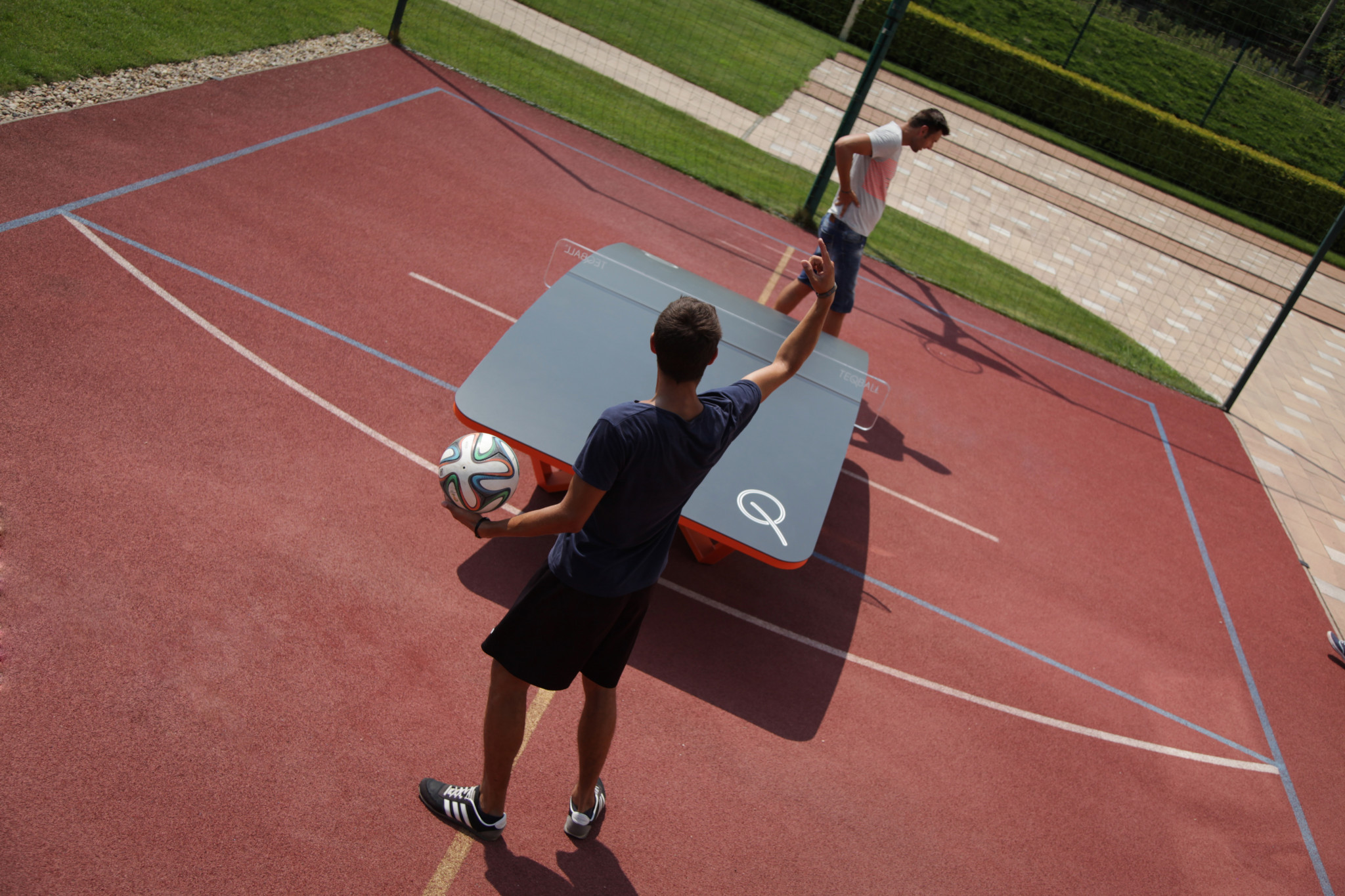 The Teq ONE table is a revolutionary piece of sports equipment.

It took more than two years of testing and research to eventually develop the table's final innovative and sophisticated shape.

The net is solid and thus the ball bounces back from it, limiting the level of interruption to games.

It is claimed the structure of a Teq ONE table, aligned with the sport's rules, does not allow luck or chance to interfere with the game and means that players can only rely on their skills and abilities. Teq SMART is a foldable version of the Teq ONE table.

It has the added advantage of being easy to move to any location, indoor or outdoor.

This is made possible through the addition of lockable wheels and the table's foldable structure.

Teq SMART can even be used as a rebound wall to play and practice against, by folding up on just one side.

The net is solid and thus the ball bounces back from it, limiting the level of interruption to games.

It is claimed the structure of a Teq SMART table, aligned with the sport's rules, does not allow luck or chance to interfere with the game and means that players can only rely on their skills and abilities.

In 2018, Teq SMART was crowned the winner of that year's iF DESIGN AWARD, a world-renowned prize, in the category of "product".

Each year, the world’s oldest independent design organization, the Hannover-based iF International Forum Design GmbH, organises the iF DESIGN AWARD.

Teq SMART won over the 63-member jury, made up of independent experts from all over the world, with its unique design.

The competition was intense with more than 6,400 entries submitted from 54 countries. Thanks to its lighter structure, the third member of the innovative teq table family is a real game changer. Teq LITE accelerates the spread of teq sports and it will attract more and more people around the world to try their teq-skills as it is more affordable for conventional users.

Its fiberglass reinforced polyester tabletop is waterproof and, moreover, it withstands UV rays which means the LITE is suitable for both indoor and outdoor use. Its multi-functionality is supported by "foldability" and the four large wheels (diameter 250mm). Equipped with a very quick opening/closing system and a safety lock on the bottom side of the tabletop, it requires less space when stored if both sides are folded-up.

The LITE maintains key features of the SMART table in that it can be easily folded for storage, taking up minimal space, and transported thanks to its wheels. The LITE could not even deny the heritage of Teq ONE as it presumes ball control and confident technique from teqball, teqis, teqpong, qatch and teqvoly players.

The long-expected table was revealed by the famous Brazilian football player Ronaldinho at the 2019 Teqball World Championship.