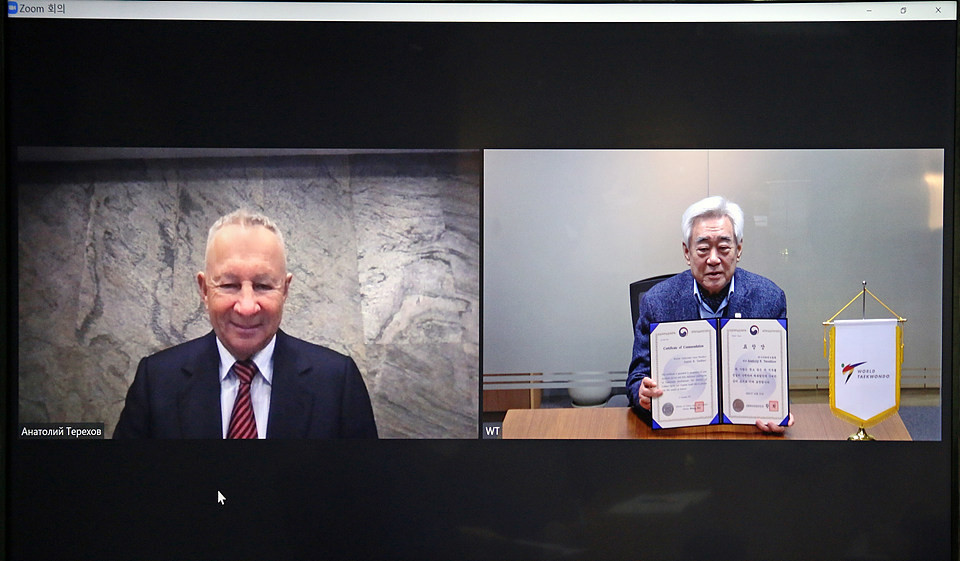 World Taekwondo President Chungwon Choue has presented a certificate of commendation on behalf of the South Korean Ministry of Sport and Tourism to the President of the Russian Taekwondo Union, Anatoly K Terekhov, in recognition of his service and contribution to the sport.

It also won two golds, one silver and one bronze at the Tokyo 2020 Olympics in the sport, under the name the Russian Olympic Committee, in line with sanctions implemented on the country by the Court of Arbitration for Sport due to state sponsored anti-doping violations.

Three of their four taekwondo athletes at the Paralympics took bronze medals too.

"I am honoured to have received this commendation and would like to sincerely thank the Korean Ministry of Sport and Tourism and President Choue for his nomination," said Terekhov.

"My team and I at the Russian Taekwondo Union have worked very hard over the last seven years to raise the standards of taekwondo in Russia and this commendation is a tribute to our collective success."

During the call, Terekhov stated he was hoping to meet Choue in person soon, with plans possibly in place to be united at SportAccord this year.

"It is my pleasure to present this certificate on behalf of the Korean Ministry of Sport and Tourism to my friend and colleague Anatoly K Terekhov," said Choue.

"President Terekhov has made a huge contribution to the development of taekwondo in Russia and led them to be one of the sport’s most successful countries.

"Their outstanding performance at Tokyo 2020 in both the Olympic and Paralympic Games reflects how far they have come under his leadership.

"Russia has also hosted many excellent and prestigious taekwondo events.

"As a member of the World Taekwondo Council, President Terekhov continues to support in the global development of taekwondo as well and he thoroughly deserves this commendation."