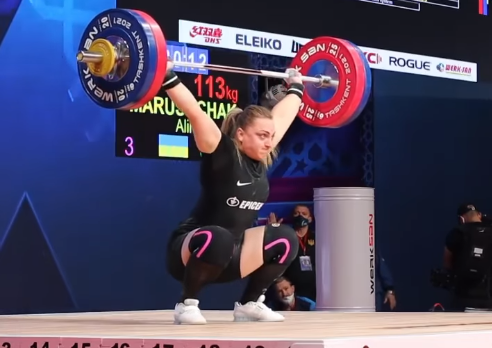 Eileen Cikamatana's attempt to become Australia’s first female world champion in weightlifting failed when she bombed out of the women’s 81 kilograms in Tashkent in Uzbekistan today.

The 22-year-old favourite was seeking her 13th straight win at the International Weightlifting Federation (IWF) World Championships but made only one good lift, her final snatch, and for the first time in her career finished without a total.

Alina Marushchak of Ukraine, who made five good lifts, took advantage and added the world title to her European Championships victory in Moscow in April.

Cikamatana took the snatch bronze on 108kg and Venezuela’s Dayana Chirinos, fourth overall, was a clean and jerk bronze medallist with 134kg.

Oceania has been hardest hit of all the continental federations in terms of travel restrictions during the COVID-19 pandemic, and this was Cikamatana’s first "live" competition for nearly two years.

She looked unusually nervous but after recovering from two failures to make her third snatch she was still well placed, 5kg behind Marushchak and holding a clean and jerk advantage of 24kg over the Ukrainian on previous best results.

But it was not to be, and Cikamatana failed to get the bar above her head on all three attempts at 141kg, which is 10kg below her best.

Australia has never had a female winner at the World Championships and its last male champion was Dean Lukin in 1984.

Cikamatana was unable to compete in the Tokyo Olympic Games because she switched nationality from Fiji to Australia after winning at the 2018 Commonwealth Games, and the qualifying period came too soon for her to be eligible.

There was a significant improvement in sixth place by Seyedehelham Hosseini, whose 98-125-223 was a sweep of best performances by any Iranian female.

After Iran’s Islamic rulers changed the law to allow women to compete, the nation entered a female team for the first time at the Asian Championships in April 2019.

There are now 20 Iranian women on the IWF results database and none of them in any weight category has ever matched Hosseini’s numbers today in snatch, clean and jerk or total - 98-125-223.

It was a very good day for Iran’s men, too.

Rasoul Motamedi made his final clean and jerk attempt at 220kg to edge ahead of South Korea’s Jin Yun-seong by 1kg and take the 102kg title.

Another Iranian, Amir Hoghoughiosgouei, was third.

Jin, who finished sixth in the Tokyo Olympic Games at 109kg, failed with his final attempt, also at 220kg, and when he lost the bar he ended up on the floor at the front of the stage, but was not injured.

Bekdoolot Rasulbekov of Kyrgyzstan, fourth on total, was second in the clean and jerk on 217kg.

Samvel Gasparyan, third in the snatch on 175kg, bombed out in the clean and jerk, as did his Armenian team mate Arsen Martirosyan.

The nine athletes mustered only 11 good lifts between them in the clean and jerk.