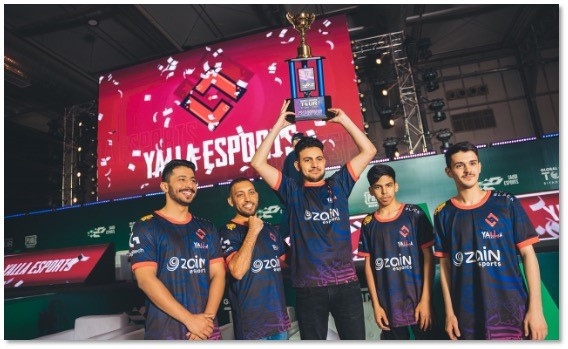 Team YaLLa Esports were crowned winners at the second stage of this year's Global Esports Tour (GET) in the Saudi Arabian capital Riyadh, which was the first ever tournament with a live audience organised by the Global Esports Federation (GEF).

Competing in PlayerUnknown's Battlegrounds mobile game, YaLLa stormed into a 41 point lead in front of Rico Infinity Team after two days of action.

However, their advantage was whittled down during the final day, to the extent that Falcons Esports were two kills away from joining them at the top of the leaderboard.

Rico finished third to round off the podium.

A total of 16 professional teams took part in the event, and millions tuned in online alongside the thousands at the Riyadh Front Exhibition and Conference Centre.

After helping YaLLa to victory, Bandar Alkahtani paid tribute to the work of the team coach Kevin Salameh.

"Kevin was the key to our win," Alkahtani claimed.

"He always motivated us and got us in the mood."

He added he was ecstatic about his team's triumph.

"We were under pressure to keep our top place," Alkahtani said.

"All of the teams’ game play changed every day.

"It was literally different styles every day, and this was really difficult.

"What a night," Foster commented.

"The excitement at the Global Esports Tour Riyadh was electric and energising.

"The community loved the format, prestigious staging, and hyper-professional organisation.

"We are committed to presenting powerful opportunities for our #worldconnected across the world by showcasing the pure human talent from these incredible athletes.

"The discipline, preparation - both physical and mental - combined with strategy and epic game play - was thrilling to see live.

"Congratulations and deep gratitude to HRH Prince Faisal bin Bandar bin Sultan Al Saud and the team at Saudi Esports Federation, and our delivery partners across the globe."

The GET event in Los Angeles last month saw Team Kraken triumph in the online strategy card game Hearthstone, and was the GEF's first in-person tournament since the beginning of the COVID-19 pandemic.

The third and final leg scheduled for this year's GET is in Dubai in the United Arab Emirates from November 26 to 27, featuring the game Counter-Strike: Global Offensive.

Riyadh has already been confirmed as host for the 2023 Global Esports Games, the GEF's showpiece event which is set to be staged in Singapore this December.