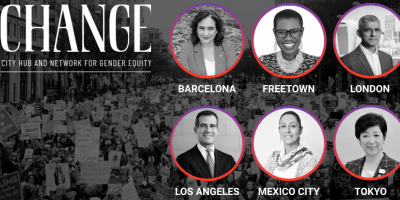 Los Angeles Mayor Eric Garcetti is to chair a new international coalition of cities committed to advancing gender equality policies through local Government and whose aims have been partly influenced by the International Olympic Committee's (IOC) Agenda 2020.

Los Angeles has joined together with another upcoming Olympic host city, Tokyo, to promote the role of women in society.

London, the only city so far to host three Olympics, 1992 host Barcelona and Mexico City, which staged the Games in 1968, have also joined Freetown in Sierra Leone as founding members of the City Hub And Network for Gender Equity - known as "CHANGE".

"This [coronavirus] pandemic has changed how we live, learn, work, socialise and govern, but what has not changed is our unwavering belief that every person deserves a fair shot and a level playing field, regardless of their gender or gender identity," Garcetti, who led Los Angeles' successful bid for the 2028 Olympic and Paralympic Games, said.

"In Los Angeles, gender equity is a prism for everything we do, and CHANGE is bringing that same perspective to cities across the globe, uniting a collection of trailblazing Mayors around steps and tools to dismantle inequality and forge a more inclusive and sustainable future for all."

Tokyo Governor Yuriko Koike claimed that Agenda 2020, the strategic roadmap launched by the IOC in 2014, helped shape the manifesto of CHANGE.

"Since taking office as Tokyo's first female Governor in 2016, I have focused on women's empowerment," she said.

"As leaders, we work to resolve issues faced by our own city.

"At the same time, we also seek to collaborate with other cities.

"I believe such collaborations not only contribute to advancing our cities, but also to resolving global challenges.

"Now, we are engaged in a tough battle against COVID-19.

"This pandemic is also having a major impact on gender equality in Tokyo and the rest of Japan.

"In this environment, for Tokyo to continue developing into a city full of vitality, it is crucial to ensure opportunities so that each and every person, regardless of gender, can fully demonstrate their individual qualities and abilities.

"Tokyo is preparing to host the Tokyo 2020 Games next year.

"I look forward to working closely with all member cities to realise the principles of CHANGE."

Data from the World Economic Forum shows that at the current pace, the gender pay gap will not close for 257 years, Garcetti revealed.

Women's jobs have been 1.8 times more vulnerable to being lost in the pandemic than men's, said a study by consultants McKinsey & Co., while Government data showed that out of the 1.1 million American workers who dropped out of the labour force in September, 80 per cent were women.

The coalition will use a gender equity toolkit developed in Los Angeles to build their own models for progress and action, Garcetti said.

"We must act with urgency," he added.

"We can't allow this pandemic to set us back further."

It is planned that CHANGE will assemble cities throughout the world committed to promoting gender equity initiatives, and exchange best-practice ideas in tackling sexism, misogyny and gender-based injustice.