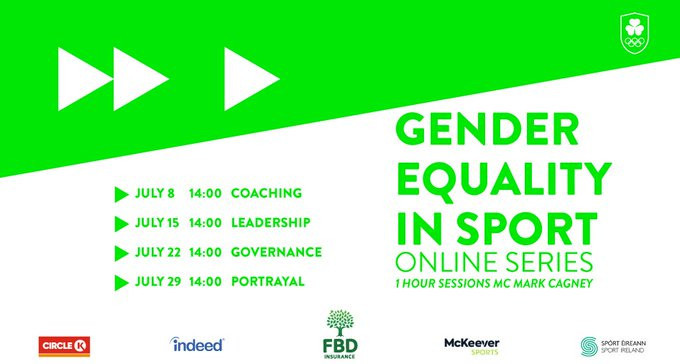 The Olympic Federation of Ireland (OFI) has launched an online series addressing how gender equality can be achieved at leadership level in sport in the country.

The idea was born out of the OFI Gender Equality Conference, which was due to be held in Dublin on March 19 before it was cancelled because of the coronavirus crisis.

Throughout the four part series it is planned that leaders from the sporting arena, decision makers and influencers discuss their personal experiences and offer insights into how to ensure that sport is a gender inclusive environment.

Every Wednesday at 2pm television presenter and journalist Mark Cagney will discuss the area of gender balance in sport across four different themes - coaching, leadership, governance and portrayal, with the sessions lasting one hour.

Pre-registration is required for each session.

The aim of the series is to demonstrate the importance of having gender balance at decision making level and to provide concrete examples of how and why having this balance will benefit the wider sporting community.

The series is primarily aimed at Presidents, chief executives and the women in sport lead at OFI Member Federations.

A limited number of invitations were also made available for members of the media and other interested individuals working in the area.

The first edition of the series, which took place on Wednesday (July 8), focused on leadership within coaching structures and included case studies from some of Ireland’s biggest names at sports management level.

OFI Gender Equality in Sport Online Series - Sally Corscadden, Olympic Eventing Performance Director with Horse Sport Ireland discusses the importance of supporting athletes according to their own needs, regardless of their gender 💥 @HorseSportIRL @salcorscadden pic.twitter.com/FMgxv55X3x

The speakers were completed by Lisa Fallon, the Irish-born head coach of the London City Lionesses in the Football Association Women's Championship, the second tier of English football.

"It is important to have balanced and diverse viewpoints represented in all areas of Irish society and Irish sport," OFI President Sarah Keane said.

"This series focuses on gender equality at the leadership level in sport, and the purpose of the series is to use concrete examples of how organisational structures can be challenged and adapted to support all sportspeople.

"Tokyo 2020 will be the most gender balanced Olympic Games ever, with 48.5 per cent of the athletes being female, which is encouraging.

"The next step is to ensure that there is a balance across the leadership positions in sport, to make sure that more voices are represented.

"This series addresses gender equality specifically, but the same philosophies apply across all areas of equality, to ensure unbiased and a more inclusive community."