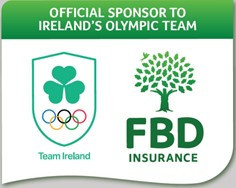 FBD Insurance have launched a campaign celebrating Irish Olympic heroes as part of the company’s sponsorship of Team Ireland.

FBD’s new campaign features a number of Ireland’s current and aspiring Olympians, who are all hoping to compete at Tokyo 2020 this summer.

It aims to highlight the determination and courage showed by athletes in order to succeed on a global sporting stage.

The campaign includes a television advert, which is supported by digital, social, and in-branch activation as well as outdoor media advertising.

"Our new campaign is released today in support of our sponsorship of Team Ireland and its athletes at what is a critical yet exciting time in each of their sporting careers," said FBD head of brand Aileen Donoghue.

"FBD is Ireland’s only homegrown insurance company and protection and support is what we do.

"It is a privilege for us in this Olympic year to be supporting Team Ireland as they look to qualify and perform at the upcoming Summer Olympic Games in Tokyo."

FBD Insurance became a principal partner to Team Ireland in September 2018, supporting 10 Irish Olympic hopefuls as part of its sponsorship.

"We are very fortunate to have FBD’s support as our primary sponsor to help Team Ireland’s athletes on their road to Tokyo," said Olympic Federation of Ireland chief executive Peter Sherrard.

"The Olympic Games represents the pinnacle of our athletes’ careers.

"It is fitting that a homegrown brand like FBD is backing the athletes on this journey as they prepare to compete at the Olympic Games."