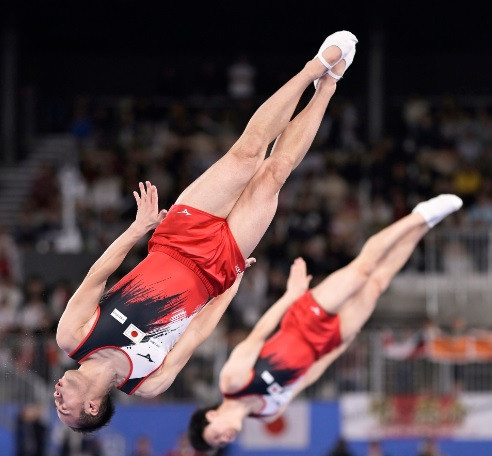 Japan clinched both team synchronised titles to continue their superb performance at the Trampoline Gymnastics World Championships in Tokyo.

Yumi Takagi and partner Ayano Kishi topped the women's standings, before Katsufumi Tasaki and Ginga Munetomo capped off another memorable day for the hosts with victory in the men's event.

Takagi and Kishi scored 49.590 to beat Russia's Susana Kochesok and Anna Kornetskaya at the Ariake Gymnastics Centre, the venue for the sport at next year's Olympic Games in the Japanese capital.

Kochesok and Kornetskaya were second with 48.570, while Samantha Smith and Rachel Tam of Canada did enough for bronze on 48.420.

"Two years ago we won two silvers and that gave us a lot of confidence," said Kishi.

"And then tonight we came out and just did it, just like the team last night."

In the men's event, Tasaki and Munetomo took gold after their routine was rewarded with a score of 52.920.

The Japanese duo dethroned two-time defending champions Uladzislau Hancharou and Aleh Rabtsau of Belarus, who were forced to settle for silver having scored 52.400.

Russia's Mikhail Melnik and Sergei Azarian were third on 52.060.

Mikhail Zalomin of Russia maintained his recent dominance of the men's double mini trampoline competition as he earned his third consecutive world title.

Zalomin's total of 77.100 was a full point ahead of silver medallist Ruben Padilla of the United States, whose compatriot Alexander Renkert claimed bronze.

Danilenko ended her long wait for gold at the World Championships, securing the title at the sixth attempt with a score of 69.900.

The Russian finished 0.300 in front of Britain's Shanice Davidson, whose tally of 69.600 saw her clinch silver.

Hancharou's synchronised defeat was compounded by his shock failure to qualify for the individual final, after the reigning Olympic champion's semi-final routine was littered with errors.

The Championships, doubling as a test event for Tokyo 2020, continue tomorrow.