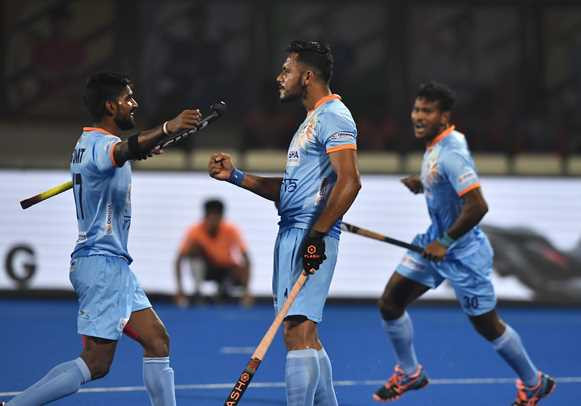 India's men and women took giant steps towards securing a place at Tokyo 2020 after they won the first leg of their respective International Hockey Federation Olympic qualifiers in Bhubaneswar.

The Indian women's team thrashed the United States 5-1, while the men beat Russia 4-2 at Kalinga Stadium.

Both sides will take a commanding advantage into the second legs, at the same venue tomorrow.

Lilima Minz gave India's women the lead against the US just before halftime with a goal against the run of play.

The US were the better team in the first two quarters, but could not capitalise and were made to pay when Minz converted a penalty corner.

India took control after the restart as two goals from Gurjut Kaur, and one each from Sharmila Devi and Navneet Kaur, put the hosts 5-0 up.

Erin Matson scored a late consolation for the visitors, who have it all to do if they are to deny India a spot at Tokyo 2020.

In the men's tie, Harmanpreet Singh gave India the lead with a penalty stroke before Andrey Kuraev equalised for Russia shortly after.

India went ahead again through Mandeep Singh, leaving India 2-1 up at the break.

SV Sunil and Singh made it 4-1 to the hosts, but Semen Matkovskiy gave Russia hope with his side's second in the dying stages of the match.

Eight games - including the second legs of India's ties - are due to be held across the men's and women's qualifiers tomorrow.