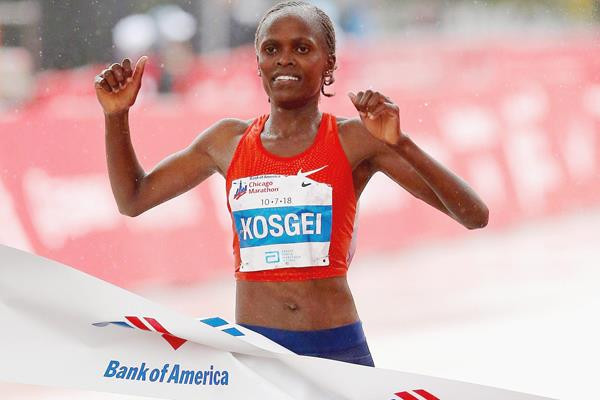 While Kipchoge’s timing of 1:59:40 at the INEOS 1:59 Challenge in Vienna was not ratifiable as a world record because he had no rivals and was paced by teams of other runners, Kosgei’s effort in one of the most venerable of events will now officially surpass the mark of 2:15:25 set by Britain’s Radcliffe in winning the 2003 London Marathon.

Such was her consistency over the remaining 12km that she pretty much held that form.

Radcliffe was at the finish line and was one of the first to congratulate the new world record holder.

"When I saw how fast Brigid was running in the first half I knew it was going to be broken," Radcliffe told BBC Sport.

Radcliffe’s record was the longest-standing for the men’s or women’s marathon over the last 50 years.

That mark, and Kosgei’s effort today, took place with men in the same race.

Kenya’s Mary Keitany holds the female-only record of 2:17:01 from the 2017 London Marathon.

Kosgei’s winning time from London this year had put her seventh on the all-time list and established her as a clear favourite for Chicago.

Ethiopia's Ababel Yeshaneh was a distant second, six minutes 47 seconds behind in a women’s race that had seen home runner Jordan Hasay, whose coach Alberto Salazar was banned for four years on doping charges at the start of this month, drop out in the second mile with a reported hamstring problem

Kosgei would have finished 23rd in a men’s race won in 2:05:45 by Kenyan Lawrence Cherono, winner of this year’s Boston Marathon, with Ethiopia’s Dejene Debela and Asefa Mengstu second and third in 2:05:46 and 2:05.48 respectively.

Britain’s defending champion Sir Mo Farah, whose build-up for this race was disrupted by questions about his time being coached by Salazar from 2011 to 2017, finished eighth in 2:09:58, four minutes slower than the European record of 2:05:11 he had set on the same course a year earlier.

His former training partner Galen Rupp, coached by Salazar throughout his career, dropped out with three miles remaining in what was a comeback race after his heel operation in October 2018.

Daniel Romanchuk won the men’s wheelchair title ahead of Britain’s David Weir in 1:30:26.