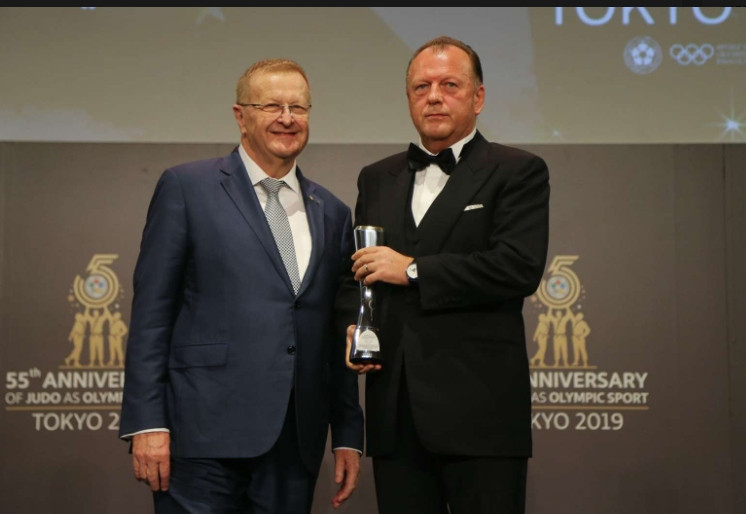 The unlikely thawing in relations between Marius Vizer and Thomas Bach continued here, when the head of the International Judo Federation (IJF) was presented with a special award as the International Olympic Committee (IOC) President sent him his best wishes.

Vizer received the President's Trophy from John Coates, leader of the Australian Olympic Committee, during the IJF Gala Dinner held on the eve of the World Championships, due to start in the Japanese capital tomorrow.

Coates, the former IOC vice-president and one of Bach's closest allies, told Vizer that it was for his "remarkable contribution to judo and to the Olympic Movement".

He added: "Dr. Thomas Bach has asked me to convey his best wishes and hopes you have a wonderful World Championships and looks forward to seeing you all next year at the Olympics.

“Mr Vizer, since 2007, since your election, you’ve made many changes, including to the rules and TV presentation and now judo is one of the leading sports in the IOC.

"You are unique among our sports that you are not dependent on the IOC for your funding.

"We look forward to seeing the Tokyo 2020 team event, I’d like to present you with the President’s Trophy, for your remarkable contribution to judo and to the Olympic Movement."

The warm sentiments expressed by such an influential IOC member as Coates comes four years after Vizer and Bach were engaged in open warfare with each other.

Vizer, in his role as President of SportAccord, had launched a surprise broadside at the IOC, alleging that it lacked transparency and that the Agenda 2020 reform process had brought little benefit to sport.

Bach, forced to watch in the front row as Vizer attacked him at the SportAccord Summit in Sochi, responded by marshalling his supporters among the International Federations, led by now disgraced International Association of Athletics Federations President Lamine Diack, to suspend their membership of SportAccord.

Vizer was eventually forced to stand down as President of SportAccord and seemed set to be cast in the wilderness for the rest of his career.

The reconciliation process had started with the pair meeting regularly during the past year and then Bach appointing Vizer to an IOC taskforce in June, established to deliver qualification events and the boxing tournament at Tokyo 2020 following the suspension of the International Boxing Association.

This latest act of conciliation has now raised speculation that Vizer could complete his remarkable comeback by being appointed an IOC member by Bach next year.

"Of course, it was a significant gesture for me," Vizer told insidethegames.

"But it was recognition for the judo family and our achievements."