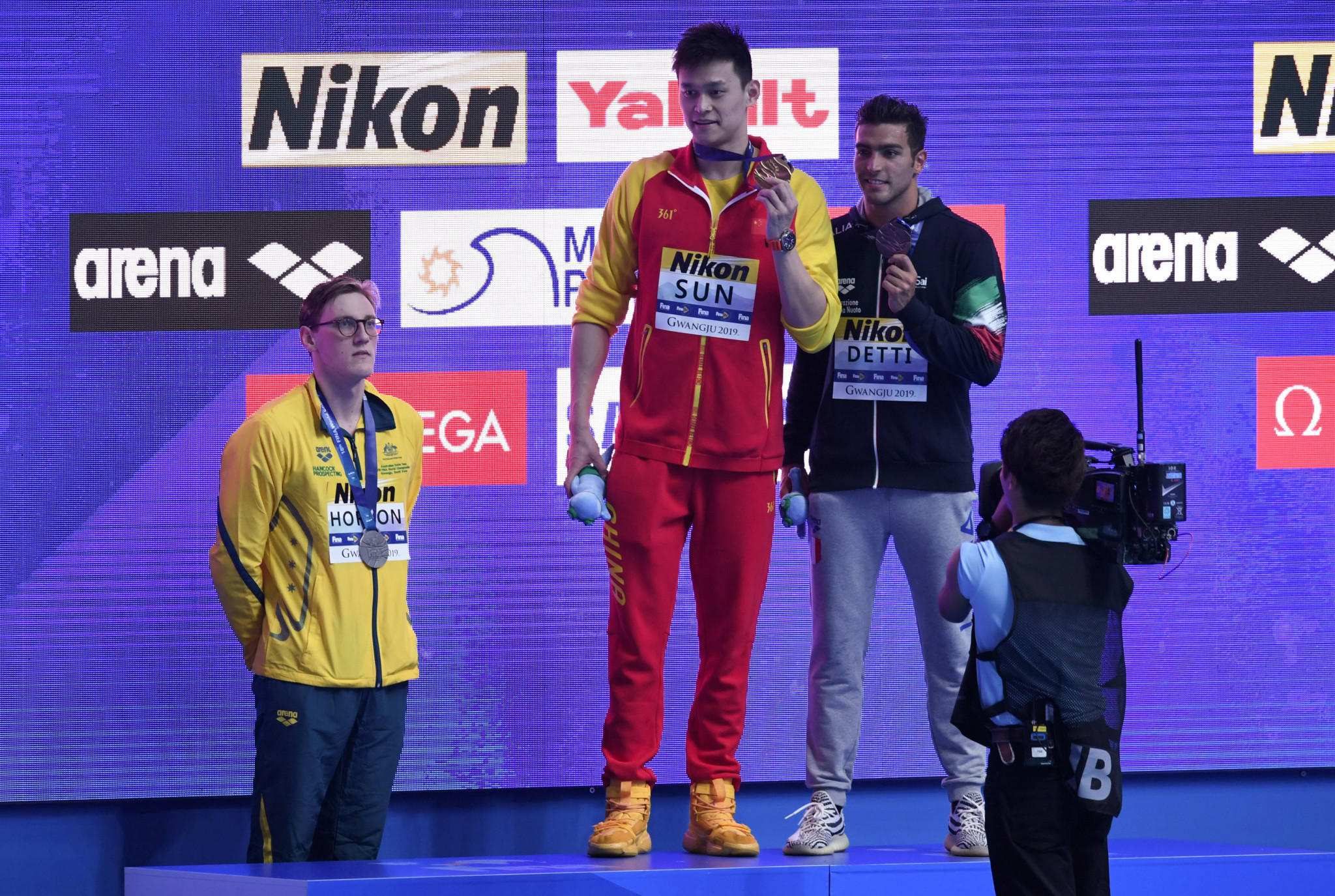 Action at FINA's flagship event concluded in Gwangju yesterday with Australia's Mack Horton and Britain's Duncan Scott both protesting against the controversial Chinese, who has left South Korea with two gold medals.

Sun, who served a three-month drugs ban in 2014, has another case hanging over his head after it was alleged a blood sample was deliberately smashed following an argument with testers earlier this year.

FINA opted to issue just a warning to the three-time Olympic champion but this decision has been appealed by the World Anti-Doping Agency (WADA) to the Court of Arbitration for Sport (CAS).

Horton, who won silver behind Sun in the 400 metres freestyle, refused to step onto the podium for the medal ceremony.

Britain's bronze medallist Scott then did not shake hands with Sun or pose for photos on the medal rostrum after the Chinese won the 200m freestyle final.

The Chinese denies all wrongdoing and FINA reportedly fast-tracked a new rule stating that athletes could be banned or lose their medal if they take part in "any political, religious or discriminatory statement or behaviour" on the podium.

"We're here to demonstrate the value of the aquatic sports," said Marculescu, according to South Korean news agency Yonhap.

"We're here to show to the world that we have fantastic swimming athletes.

"These things happen and, hopefully, they're not going to happen any more.

"Hopefully, after we continue discussing with federations and with athletes, everything will now come together again."

The Romanian claimed that FINA were among the best performing governing bodies in the fight against doping and said the organisation would accept any outcome in the Sun case.

"CAS will decide," he said.

"And whatever CAS decides, we need to accept.

"I think we're leading other international federations in the fight against doping.

"Always, you'll have incidents here and there.

"But the general view is FINA continues to understand the situation of doping and do as much as we can."

In all, more than 450 doping tests were carried out in Gwangju over the 17 days of competition.

An anti-doping education programme also took place in the Athletes' Village, but Australia's Commonwealth Games gold medallist Shayna Jack did not compete after a failed test.

The 20-year-old's failure for banned anabolic agent ligandrol is seen as an embarrassment for the country following Horton's earlier stance, although Jack has vowed that she "did not and would not cheat".

More than 2,500 athletes from 194 countries took part at the Championships, as well as a refugee team.

Ten world records were set in the swimming at the event which was a key stop on the way to next year's Tokyo 2020 Olympics.

Despite the protests threatening to overshadow the sporting action, FINA declared the event a success.

"Firstly, I would like to congratulate all of the athletes who competed in what has been a hugely successful FINA World Championships here in Gwangju," said FINA President Julio Maglione.

"There is no doubt that these two unforgettable weeks of elite competition will only help aquatics go from strength to strength, and continue to grow our sport around the world.

"I would like to thank the Government of the Republic of Korea, the City of Gwangju, the Korean Swimming Federation and the Organising Committee for being such hospitable hosts and for all their support, as well as the athletes, coaches, officials and respective National Federations for their continued hard work and dedication."

Lee Yong-sup, the Mayor of Gwangju, added: "We are deeply grateful to FINA.

"Their trust and confidence in our city made this competition a very successful one.

"The citizens of Gwangju must also be proud of this achievement.

"They welcomed the FINA family in the best possible way and were highly praised for their kindness and hospitality."

Away from the action there was tragedy in Gwangju after a loft at a nightclub collapsed, killing two people and injuring 16.

Eight foreign athletes competing at the Championships were among those hurt.