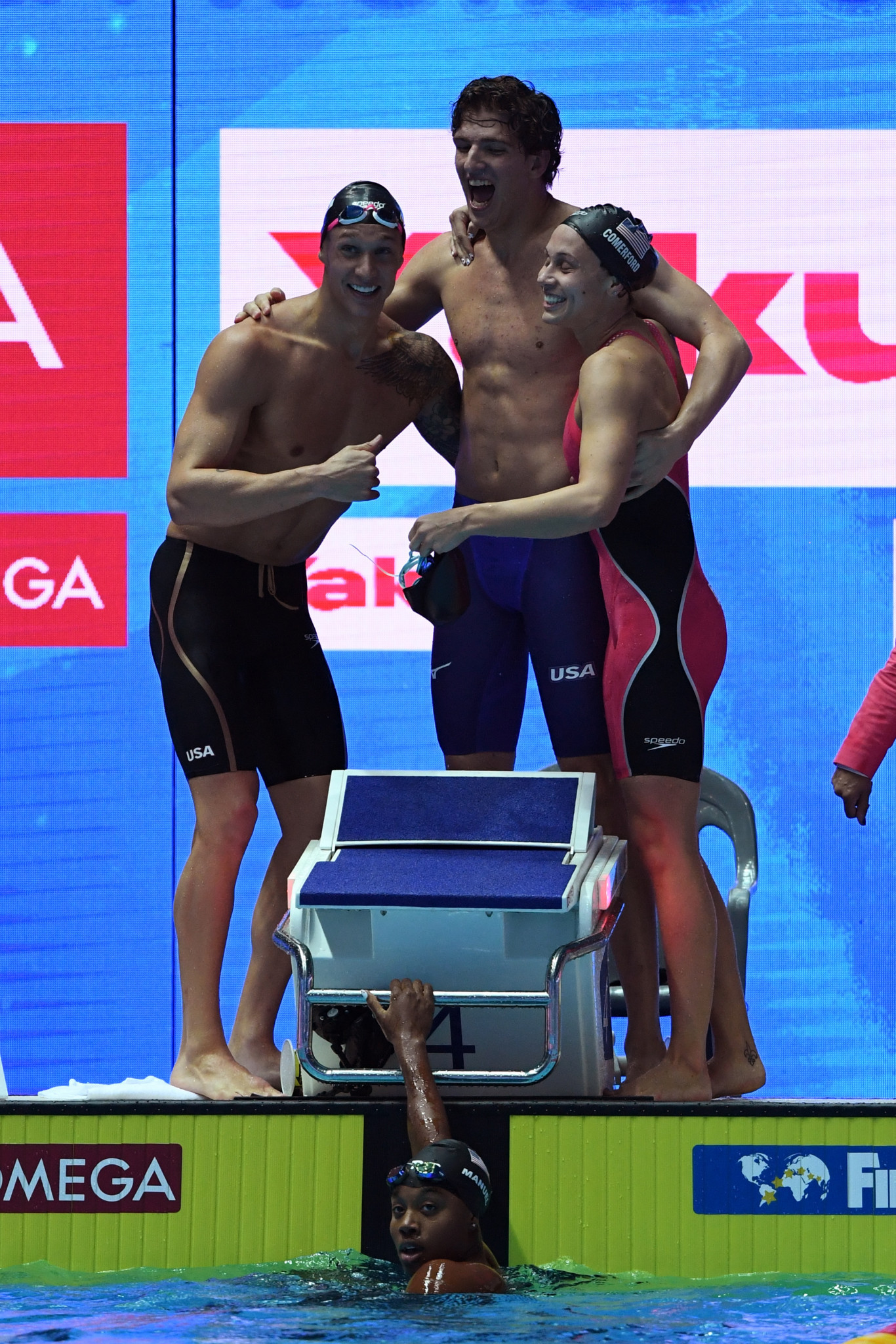 The United States completed a stunning night in the pool at the 2019 International Swimming Federation World Aquatics Championships with a world record in the mixed 4x100 metres freestyle relay final for their fifth gold medal of the day. (July 27).

The team of Caeleb Dressel, Zach Apple, Mallory Comerford and Simone Manuel took gold in Gwangju in South Korea, in a best ever time of 3min 19.40sec at the Nambu University Municipal Aquatics Center.

For Dressel, it is his sixth gold medal of an exceptional Championships and his third of the night after he earlier triumphed in the men's 50m freestyle and 100m butterfly.

Dressel won the free in 21.04sec, edging out Brazil's Bruno Fratus and Kristian Gkolomeev who both earned silver after a dead heat, both men swimming 21.45.

The US swimmer then dominated the butterfly final in 49.66, more than a second ahead of Russia's Andrei Minakov, who took the silver medal in 50.83, while South Africa's Chad Le Clos swam 51.16 for the bronze.

Dressel's team-mate Katie Ledecky, meanwhile, won her fourth gold medal of the Championships after a comeback victory in the women's 800m freestyle.

American Ledecky caught Italy's Simona Quadarella in the final 50m to triumph in a time of 8:13.58.

Quadarella had to settle for the silver in 8:14.99, with Australia's Ariarne Titmus finishing third in 8:15.70.

US teenager Regan Smith, having set a world record in the women's 200m semi-finals, came up just short of a repeat on her way to the gold medal.

The only non-American gold today came in the opening final of the evening, the women's 50m butterfly, with Sweden's Sarah Sjöström taking victory for the third Championships in a row.

Sjöström won in 25.02, as Ranomi Kromowidjojo of Netherlands and Egypt's Farida Osman completed the same podium as in the 2017 World Championships in Budapest, in 25.35 and 25.47 respectively.

Sjöström had also won the title at Kazan in 2015 and now has a total of eight World Aquatics Championships gold medals.

The Italians led throughout in front of a crowd of around 3,000, and were ahead 5-3 at half time and 8-4 in the final break.

It marks a second successive final disappointment for Spain after their women were beaten by the US in yesterday's gold medal match.