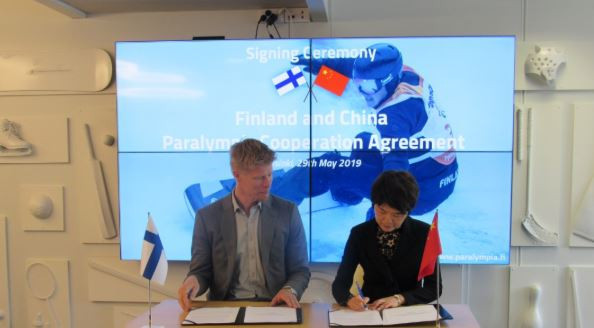 A Memorandum of Understanding (MoU) has been signed between the National Paralympic Committee (NPC) of Finland and China Disabled Peoples' Federation (CDPF) to work together to support the 2022 Winter Paralympic Games in Beijing.

The MoU is aimed at assisting in the preparation for Beijing 2022 and beyond, in a first Para-sports partnership between the two nations, Business Finland reported.

A statement from Petri Tulensalo, head of Winter Sports Cluster at Business Finland, posted online stated: "Signing of this Memorandum will not only help to promote the development of Paralympic sports cooperation between the two countries, but it also a sends a message, that winter sports are for all regardless of disabilities or limitations."

Meimei expressed hope to broaden the cooperation to also include summer sports.

She told Business Finland: "China and Finland have a good and long relationship.

"We have been inspired by Finnish nature and the work done at the grassroots level in Finland.

"This cooperation is a good opportunity to learn from each other."

Kuorikoski also mentioned how societies can be equalised by the Paralympic Movement.

"There are already many examples of Chinese athletes training in Finnish Sport Institutes or with Finnish trainers," he told Business Finland.

"However, Finnish know-how is not the only thing we can promote to China.

"We must remember the huge size of the Chinese market for example in the assistive devices, where Finnish products could seize the opportunity and offer services for the growing demand."

In January, China agreed a "Year of Winter Sports" deal with Finland.

The partnership between the two nations was officially launched by Chinese President Xi Jinping and Finnish counterpart Sauli Niinistö during the latter's visit to China.

The cooperation includes Chinese cross-country skiing, biathlon and ice hockey athletes training in Finland in the build-up to Beijing 2022.

Finland were among the dominant nations when the Winter Paralympic Games were first launched.

Between 1976 and 1992, they always finished among the top five countries in the overall medals table, including at Innsbruck 1984 when they came second overall with a total of 34 medals, including 19 gold.

But in recent years they have slipped, finishing 16th at Pyeongchang 2018 with three medals, one of them gold for Matti Suur-Hamari in the snowboard cross SB-LL2

China made its debut in the Winter Paralympic Games at Salt Lake City 2002 and won their first medal at Pyeongchang 2018 - in wheelchair curling.

The 2022 Winter Paralympic Games are due to take place from March 4 to March 13.