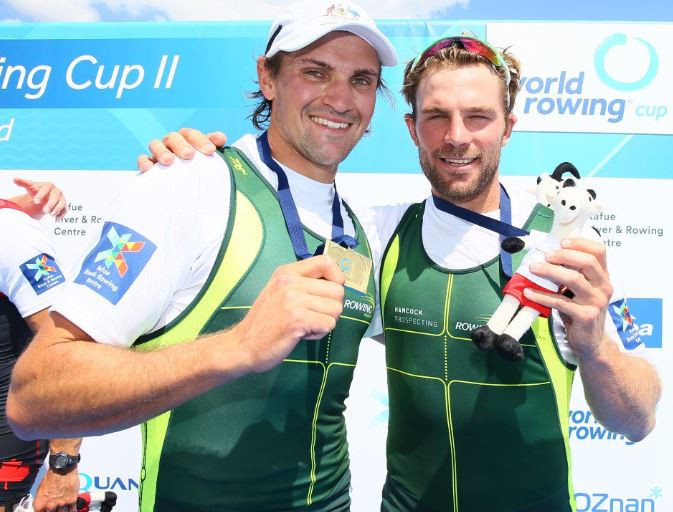 Australia topped both the points and medal table in Europe for the first time as they won a maiden World Rowing Cup of the season in Poznań.

On a busy day, Alexander Hill and Joshua Booth led the men's pair from start to finish and took the win, despite a late sprint from their New Zealand rivals.

"This is our first international race together and we were against a really good field," Hill said.

"We managed to get a good lead and then it was just about maintaining the gap.

"We’re really happy with the result.”

Poland, Italy and the United States battled for the lower medal positions.

As Australia surged for the line it was Italy who snatched silver and Poland the bronze.

The Polish M4x crew were proud to have won 🥇in front of a home crowd! 🙌

A close battle went to the wire in the women's eight race as the Australians went up against reigning world champions, the US.

The green and gold team had the edge at the 500 metres mark with Britain getting ahead of the Americans in second.

Australia motored to almost a full boat length lead at the halfway point and eased to victory at a stroke rate of 39, with the US fighting back for silver and New Zealand taking the last step on the rostrum.

There was home success for Poland when they clinched the men's quadruple sculls title ahead of Australia and New Zealand.

The crew of Fabian Baranski, Szymon Pośnik , Wiktor Chabel and Dominik Czaja moved into the lead with a 35-stroke pace with Germany in close pursuit as Britain and New Zealand battled for third.

A surge through the field saw Australia take a stroke rate up to 46 as they edged ahead of Germany at the line to snatch silver, with the New Zealanders grabbing the bronze, 0.02 seconds ahead of the Germans.