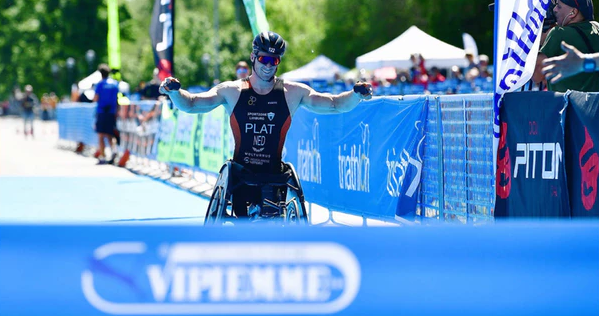 The Paralympic champion was the favourite to claim victory in the race in the Italian city, which was making its debut appearance on the circuit.

Seely emerged the clear winner at the end of the course, which featured a 750 metres swim, 19.5 kilometre bike section and 5km run.

Jetze Plat and Geert Schipper delivered a Dutch one-two in the men’s PTWC classification, the former winning in 54:34.

Schipper ended behind the Paralympic champion in 57:27, while Italy’s home favourite Giovanni Achenza clocked 58:13 for third.

The women’s PTWC race was won by Spain’s Eva Maria Pedrero in a sprint finish, as she recorded 1:11.15.

Brazil’s Jessica Ferreira was awarded second on the same time as the winner, while the Netherlands’ Margret Ijdema ended in 1:12.33 for third.

France’s Jules Ribstein secured an impressive win in the men’s PT2 race in 1:06.18.

There was an equally comfortable win for Britain’s Hannah Moore in the women’s event, as she ended in 1:10.09.

United States’ Kelly Elmlinger was six minutes back in second, while Australia’s Sally Pilbeam a further minute down in third.

Britain’s Dave Ellis was forced to settle for second in the men’s event as he ended exactly one minute adrift of Spain’s Hector Catala Laparram, who recorded 1:00.09.

There were also victories for Australia’s Kate Doughty and Russia’s Anna Plotnikova in the women’s PT5 and PT3 events, respectively, while Victor Chebotarev of Russia earned the men’s PT3 title.

The season opener will be followed by an event in Yokohama, Japan next month, before Montreal in Canada hosts action in June.