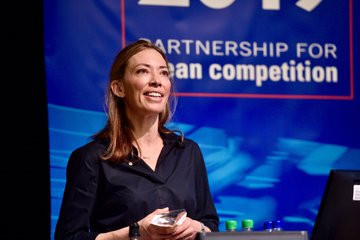 Lawyers for Scott and Moses said the WADA probe "lacked transparency and independence" and was "akin to a kangaroo court" in a letter to the anti-doping watchdog.

Olympic cross-country skiing gold medallist Scott and Moses, a double Olympic champion in the 400 metres hurdles, will not conduct interviews with investigators as a result.

In response, WADA said it was "unfortunate they have refused to cooperate with the very process they themselves called for" and said their refusal to explain their perspective was "regrettable and unusual".

The investigation was launched after an initial inquiry had concluded the alleged bullying of Canadian Scott by WADA Executive Committee members at a fractious meeting in the Seychelles in September – where the Russian Anti-Doping Agency was controversially reinstated – had not taken place.

But WADA said a second phase of the inquiry, including interviewing those present at the meeting, would be held owing to the "seriousness" of the accusations made.

Moses had also raised concerns and claimed he had been subjected to similar treatment to Scott.

Brown Rudnick, hired by Scott and Moses, claim there is a "clear conflict of interest" as the company leading the investigation - Covington & Burling LLP - has a "long-standing client relationship with WADA".

Witness interviews had been conducted before Scott and Moses had been allowed to present their allegations, they claim.

They also allege the investigation "has no terms of reference, scope, reporting requirements or public disclosure protocols".

Brown Rudnick claimed these issues had been raised with WADA but none had been given a satisfactory response and had instead been "cast aside".

In a statement, WADA said Covington & Burling LLP were appointed to conduct the second phase of the investigation after Scott and Moses said the unnamed Canadian firm which oversaw the first probe was "not independent enough".

WADA added that Covington was continuing with its work and a report is due to be presented at the next Executive Committee meeting in Montreal on May 15.

"WADA notes with disappointment the decision of Beckie Scott and Edwin Moses to decline to cooperate with the independent investigation into Ms. Scott’s allegations of improper conduct by members of the Agency’s Executive Committee at its September 2018 meeting," the statement read.

"It is unfortunate that Ms. Scott and Mr. Moses, who continue to sit as chairs of WADA’s Athlete Committee and Education Committees, respectively, have refused to cooperate with the very process they themselves called for.

"While their refusal to explain their perspective on an issue they raised is regrettable and unusual, WADA has continued in good faith to ensure these serious allegations are investigated as thoroughly and as fairly as possible and expects that the investigation will conclude shortly."

Scott had accused some Olympic Movement representatives on the WADA Executive Committee of treating her with "disrespect" and of subjecting her to "inappropriate comments" at the meeting.

When RUSADA were reinstated despite her opposition, she resigned her position on WADA's Compliance Review Committee in protest and was replaced by South African double Olympic swimming champion Penny Heyns.