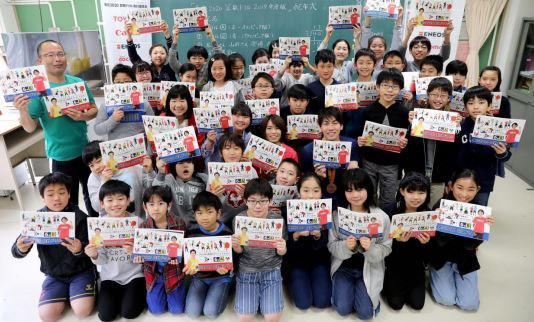 The Tokyo 2020 Organising Committee has introduced a specially-formulated mathematics textbook which aims to help students enjoy the study of maths through interaction with Japanese athletes and sporting bodies.

The book also gives students the opportunity to participate in educational initiatives linked to the Games.

On April 17, Tokyo 2020 hosted a special class using the new textbook in a public elementary school in Tokyo, with the participation of two Japanese Games medallists, Olympian Kaori Matsumoto and Paralympian Takuro Yamada.

The new material is in two parts; one containing maths challenges related to 33 Olympic sports and the other with content related to 22 Paralympic sports.

Some of the questions in the textbook ask pupils to measure aspects of Olympic and Paralympic performances, for example, calculating the average distance 12 balls were thrown during an actual boccia pairs competition.

Athletes appear with their photos in the textbook, which also aims to spur pupils’ interest in sport while they are studying maths.

“But thanks to this interesting learning material which features me and many other Olympians and Paralympians, I saw how much more the students enjoyed answering the questions, and how easily.

“I felt they were having more fun learning and that this would widen their possibilities.

“I hope my daughter will like studying mathematics using this kind of textbook.”

Yamada, swimming bronze medallist at the Rio 2016 Paralympics, said: “Many Paralympic sports would still not be so well-known were it not for the Tokyo 2020 Paralympic Games being hosted here next year.

“When I heard about the Tokyo 2020 mathematics textbook, I wanted to support it because it‘s a great way to promote Paralympic sport to many children.

“Children will play an important role in livening up events at the Olympic and Paralympic Games.

“I believe that this is great initiative, allowing these children to enjoy learning.”

The textbook, created with the help of Japanese Olympians and Paralympians, is one of the initiatives stemming from Tokyo 2020 Education Programme “Yoi Don!”, which translates as “Get Set!”.

Tokyo 2020 is providing the textbook to local authorities across Japan who request it.