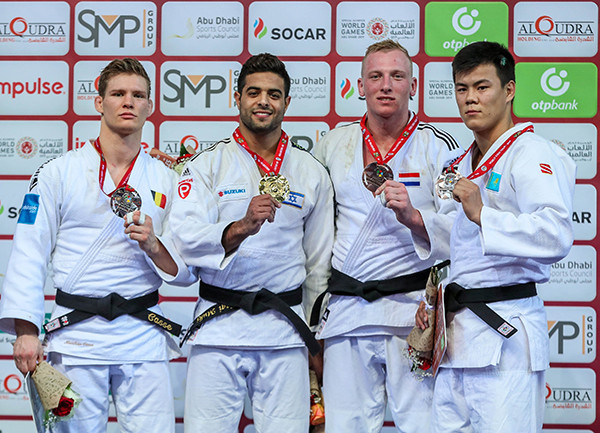 Israel won a historic gold medal on day two of the International Judo Federation (IJF) Abu Dhabi Grand Slam - a year after the country's flag and national anthem had been banned in the United Arab Emirates city.

The host country has no diplomatic relations with Israel and has forced their athletes to compete under the IJF flag.

Tal Flicker won men's under-66 kilograms gold in 2017 which highlighted the stance to the watching sporting world.

In response, the IJF suspended the Abu Dhabi event but it has gone ahead as planned after authorities promised that Israelis would be allowed to compete without discrimination.

The nation competed with their flags and symbols yesterday, winning two bronze medals on a day the IJF described as a "watershed moment" for judo.

They did even better today as Sagi Muki won the men's under-81kg title at the Mubadala Arena.

To add extra shine to the victory, today marks World Judo Day which sees the sport celebrated across the world.

IJF President Marius Vizer has also announced that Israel will host a Grand Prix event in Tel Aviv in 2019 and 2020.

"We are able to send to the world a message of solidarity, friendship and peace and I thank everyone involved in this achievement.

"We showed a nice example to the youth of the world in a moment that was not just more than a sport but more than judo and was a crucial moment in the world.

"I hope the unity between the two cultures, Muslim and Israeli culture is a start for a new era in the sport and later in the world, social, political, economical areas.

"Thank you very much to all of you."

He defeated Kosovo's Akil Gjakova via waza-ari for his first Grand Slam crown in 11 attempts.

The Netherlands and France won the two women's titles contested.

Juul Franssen claimed the Dutch gold as she rolled out Slovenian opponent Andreja Leski in the golden score period of the under-63kg final.

Away from the mats, three-time world champion and Athens 2004 Olympic champion Ilias Iliadis of Greece marked World Judo Day by providing a "masterclass" for UAE athletes.