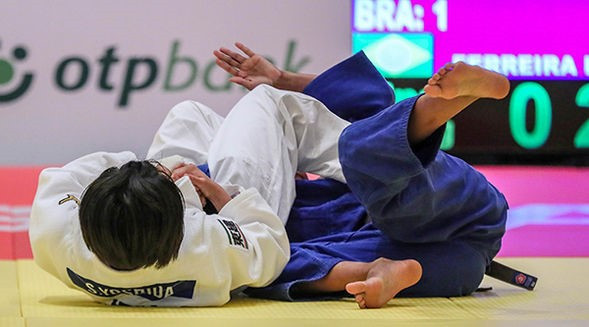 The International Judo Federation (IJF) World Junior Championships have concluded with a sixth gold for Japan in the mixed team event as they topped the medal table in Nassau in the Bahamas.

Japan dominated their opponents Brazil to win 4-1 in the final at Atlantis Paradise Island for their sixth gold medal of these Championships.

The first contest was automatically awarded to Brazil as Japan were unable to field a men’s under-90 kilograms competitor.

Lukas Lima was not required to fight as Saito Tatsuru had picked up a back injury to prevent him from competing.

That is as good as it got for Brazil, however.

In the under-60kg category, the world champion Koga Genki took the lead for Japan with another submission win over Renan Torres.

Three-time Junior World Championships winner Funakubo Haruka made it 3-1 to Japan as she beat Ketelyn Nascimento with a golden score.

Nascimento conceded her third shido in extra time to hand the victory to her Japanese opponent.

In the under-73kg fight, Tsukamoto Ryo won by ippon over Brazil’s Jeferson Santos Junior to put Japan one win away from the gold medal.

Shimmori Ryu won the last clash of the gold medal match as she submitted Ellen Santana with shime-waza.

The bronze medals were awarded to Kazakhstan and Russia.

Kazakhstan defeated France for the first bronze medal, 5-2 in a tight contest.

The final match was a must win for France to stay in contention for a medal but Kazakhstan managed to take the win in golden score.

Russia then beat Georgia in another close contest which finished 5-3.