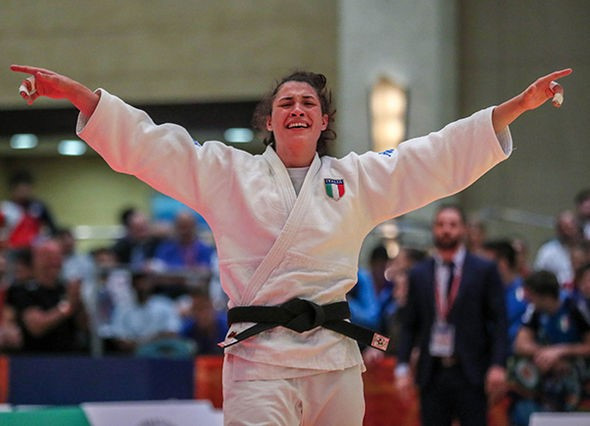 There was double gold for Italy on day two of the International Judo Federation World Junior Championships in Nassau, The Bahamas.

Alice Bellandi won their first gold of the day in the women's under-70k kilograms category at Atlantis Paradise Island.

The Junior European Championships winner needed over a minute of golden score to defeat Ryo Shimmori.

In the bronze medal matches, Margit De Voogd had to face team-mate Donja Vos for a place on the podium.

De Voogd scored in the last ten seconds to take the bronze for The Netherlands.

The second bronze went to Candice Lebreton of France who beat the number one seed, Ellen Santana.

The Brazilian had to settle for fifth.

Parlati beat Japan's Kasahara Hiromasa in the gold medal match with a powerful throw for ippon.

The Netherlands took their first gold medal of the Championships with Sanne Vermeer taking the women's under-63kg title.

The Dutch judoka scored waza-ari first before finishing the fight with a seoi-nage.

Japan's Ura Asumi took the first bronze medal as she scored a waza-ari against Natalia Kopska of Poland after 90 seconds and held on for the win.

The Georgian threw his opponent after just 39 seconds for the under-90kg title.

The bronzes were awarded to Japan and Turkey.

The contest between Mashiyama Kosuke of Japan and Germany's Falk Petersilka was scoreless in normal time but the Japanese judoka came out fighting in the extra action to take the win in 11 seconds.

It took only 38 seconds for the Turkish judoka to take the bronze by ippon.