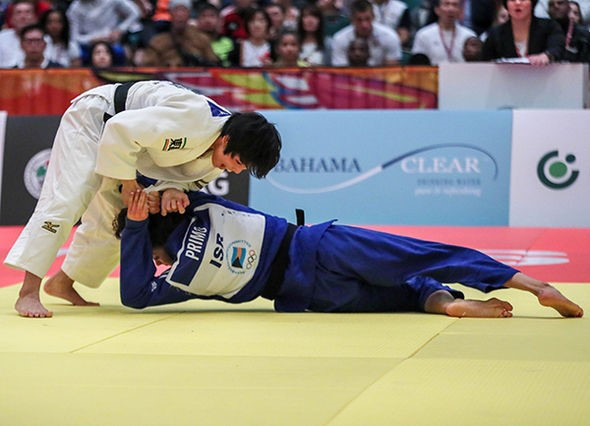 The Japanese judoka won her 2015 cadet title in the under-57kg category but seems to have successfully transitioned to the lower weight class.

Kaleta tapped out her opponent with a juj-gutame for ippon.

In the next weight category, Japan's Haruka Funakubo remained unbeaten at the Junior World Championships, taking her third world title at this level.

The under-57kg defending champion won gold in 2015 and 2017 and debuted on the IJF World Judo Tour by winning bronze at the Zagreb Grand Prix.

Funakubo's opponent was France's Sarah Leonie Cysique who could not score against the Japanese judoka, who managed waza-ari before pinning her opponent for ten seconds and the victory.

The bronze medals went to Slovenia and Japan.

The first kyu brown belt had to battle through five-and-a-half minutes of extra time until the Serbian conceded her third and final shido to be eliminated.

Golden score decided the outcome between Tomizawa and Mongolia's Enkhriilen Lkhagvatogoo, with the Japanese judoka scoring after 29 seconds of additional time.

In the men's competition, top seed and Junior European Championships winner Manuel Lombardo of Italy added the world junior title to his accomplishments.

After 71 seconds of the contest, Lombardo threw his opponent for ippon and the title.

In the final contest of the day, the Senior European Championships bronze medallist Bilal Ciloglu had to come from behind to defeat his Japanese opponent in the gold medal match.

Keeping his composure, Ciloglu scored after 16 seconds to take the victory.

Whilst claiming the first medal for his country, Markarian scored one of the most impressive throws of the competition so far.

The Greek judoka threw with seoi-otoshi for ippon to take the bronze.

Bagtbergenov scored with nine seconds left on the clock, giving Gamosov no time to respond.

Day two of the Championship also saw the tournament officially opened by the Opening Ceremony as the IJF President, Marius Vizer, was joined by the Minister of Youth, Sports and Culture for The Bahamas, Lanisha Rolle, and Bahamas Judo Federation President D'Arcy Rahming.